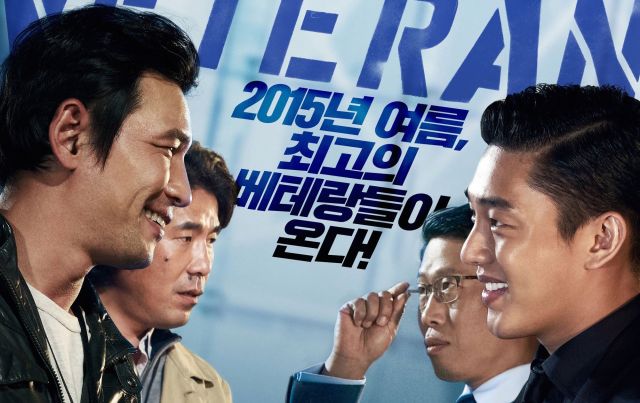 All right, facetiousness aside there's plenty to admire here. Like everything single action scene. Really- the extended open has nothing to do with Tae-oh at all. It's just Do-cheol running a scam designed to get him in a room with a bunch of guys he can beat up in increasingly comical ways with whatever blunt instruments happen to be nearby. It really helps the humor that Hwang Jung-min is obviously having a lot of fun. A later extended action scene starts out with Do-cheol just dancing gleefully until his boss barks at him to do some work instead of cheerleading on the other cops.

The action comedy in "Veteran" is easily the caliber of a classic Jackie Chan movie- half of it is intense choreography and the other half of it is intense awkwardness. Not just Do-cheol, but all the rest of the police team completely nail their punchlines just in time to razzle the viewer with another fabulous setpiece. "Veteran" look absolutely beautiful in motion and the opening sets up the promise of a constantly thrilling story to come.

Then the actual plot, the one featuring Tae-oh, sets in. And this story is much less fun, because writer/director Ryoo Seung-wan makes the questionable decision to go for serious class commentary on the horrible things sadistic rich people can get away with. I'm all for class commentary, but Tae-oh is so cartoonishly drawn as a villain it's impossible to take him seriously. Which is unfortunate because the longer "Veteran" goes on the more obvious it is that we're supposed to see the story as a serious fight between good and evil.

This might not have irked me so much except that the mystery is poorly constructed. "Veteran" is another movie that takes place in a universe where modern medical examiners are just really incompetent. And don't get me started on the final summation. No corporation in the world, let alone an evil one, has employment benefits good enough to manage a cover-up of this magnitude. You might as well have Tae-oh enlist the help of space aliens- it wouldn't be any less plausible.

Granted, I'm guessing you're probably more interested in whether "Veteran" is fun rather than whether it's plausible. And...well, it's fifty-fifty really. Half of the movie is funny action jokes, and the other half is not-especially-funny-watch-the-bad-guy-be-a-sadist-while-the-hero-looks-on-helplessly plot. I know that was a lot of hyphens, but that's pretty much how it feels in the movie too. Like I'm impatiently waiting for it to get back to the fun parts I liked instead of belaboring an obvious point.