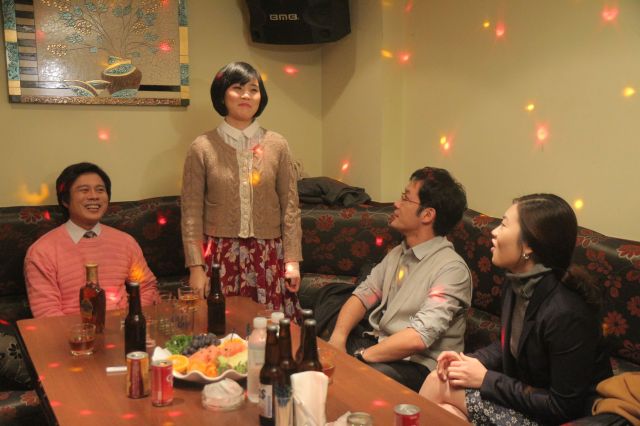 Seon-woo (played by Lee Hyo-rim) is a teenage girl who does teenage girl stuff like...talk to her girlfriends. Smoke cigarettes. Get s a job. Occassionally enjoying the presence of a man while for the most part hating men because they're creeps. Seong-gook (played by Bae Jin-man) is a spaz (in the medical sense of the term) who does normal stuff like walk places. Eat dinner. Drink alcohol. Work at a convenience store located inside the subway station. Eventually, Seon-woo and Seong-gook meet.

As hard as it may be to imagine that really is the entirity of the plot to "Waiting For The Snow". It's the kind of movie where you can absent-mindedly look at your watch and discover, to your shock, that forty minutes has passed without a single scene of any apparent consequence having happened. This is because neither Seon-woo nor Seong-gook have any kind of serious existential problems. They're not even especially lonely or depressed, they're just not very talkative.

Take one very late scene, after Seon-woo and Seong-gook's first meaningful encounter, where they're just absent-mindedly watching a violent scene that appears to have wandered in from a completely different movie. They comment, and then move on because the violent scene has nothing to do with them and they're not the kind of people who get involved in that kind of thing. It's not like an interventionist mindset would do anyone any good anyway.

While this sort of thinking makes sense in regards to the kinds of people Seon-woo and Seong-gook are, ultimately, the entire film got painted in the same basically pointless brush as I struggle now to even get a grasp of what the film's purpose is supposed to be. If it was to show off the friendship between a low-class teenage girl and a spaz, why does it take so long for them to meet? Why do we get so much background into their daily lives when none of that ends up mattering, and neither Seon-woo nor Seong-gook make any apparent life decisions based on their fateful encounter?

"Waiting For The Snow" isn't all that bad conceptually, but it really does suffer from a lot of blank space that just seems to be realism for the sake of realism. Ultimately we don't really need to know all that much about Seon-woo or Seong-gook to enjoy their walk together, because they don't know anything about each other either. They enjoy their time together because they don't have to think about that stuff.

As far as character study goes writer/director Jang Hee-cheol does manage to craft a somewhat interesting piece. Ironically the cast is unlikely to garner much in the way of accolades because these characters are, by nature, very unexpressive. And besides that there's really just no good way to act like a spaz. The muscle spasms are just too overwhelming. Much like the scene which inspired the film's title, "Waiting For The Snow" , while fleetingly amusing, is ultimately probably just not worth the effort.

"Waiting For The Snow" is directed by Jang Hee-cheol and features Lee Hyo-rim, Kang Seong-gook and Bae Jin-man.

"[HanCinema's Film Review] "Waiting For The Snow""
by HanCinema is licensed under a Creative Commons Attribution-Share Alike 3.0 Unported License.