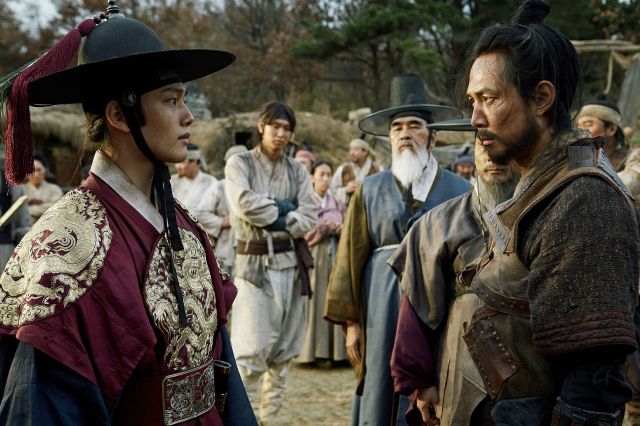 In 1592, the Japanese invaded Korea. King Seonjo (played by Park Ho-san) decides that he needs to stick close to China in anticipation of reenforcements. Meanwhile, his son, the Crown Prince and later King Hwanghae (played by Yeo Jin-goo) is sent to the front lines to carry the royal banner in King Seonjo's stead. The effect of this is...not good on morale. Still, Hwanghae's personal guard Yang-sa (played Bae Soo-bin) tries to put on a good face even as he's forced to rely on help from the lower-class To-woo (played by Lee Jung-jae) and his band of professional hunters.

Yang-sa believes that the trappings of royalty must be honored at all times. To-woo believes, rather more sensibly, that there is a war going on, and that dedication to decorum in such awful circumstances is straight up absurd. Note how the only reason why To-woo and his men were conscripted in the first place was because normal soldiers are in short supply. In To-woo's mind, this proves that the royal family is incompetent, and that they should be grateful he's helping out at all.

The political paralells are obvious- for those baffled as to the resurgence of populism worldwide, this is pretty much why. Decades of "smart" people steeped in complicated political cultures have only resulted in chronic failure. Thankfully most of you reading this review don't live in a literal war zone, and that's where the dramatic heft of "Warriors of the Dawn" comes in. Can To-woo and his compatriots see the job through to the end, even as they see Korean royalty as literal dead weight?

They do, but not for the rah rah patriotic reasons you're probably expecting. No, To-woo looks at the bigger situation, realizes to his disdain that the Japanese will be even worse than the corrupt Korean royals, and reluctantly picks the least bad option. All To-woo really has to hope for is that maybe Hwanghae, separated for the first time from palace life, will actually learn something about the common people in the country he's supposed to rule one day.

And that much, at least, makes for an interesting historical theory. King Gwanghae has an ambiguous historical reputation mostly because a lot of the stuff he did reduced the power of the nobles. It's actually quite plausible to visualize Gwanghae seeing the horrors of war firsthand and having this badly shake his outlook on life. Gwanghae is simultaneously the cause of and solution to the Japanese invasion and geez, that's a lot for a teenager to take in.

"Warriors of the Dawn" features some glorious cinematic violence yet taken as it is from Gwanghae's point of view, it is always consistently horrifying. With barely a moment's notice Gwanghae has to transition from personal fear to existential self-doubt to comedy of manners to fighting to the death to deathly calm and back again. Lucky thing Yeo Jin-goo is up to the task- although really, the entire ensemble of "Warriors of the Dawn" is fantastic, giving the film a lot of dramatic resonance.

"Warriors of the Dawn" is directed by Chung Yoon-chul and features Lee Jung-jae, Yeo Jin-goo, Kim Moo-yul and Kim Myung-gon.

"[HanCinema's Film Review] "Warriors of the Dawn""
by HanCinema is licensed under a Creative Commons Attribution-Share Alike 3.0 Unported License.