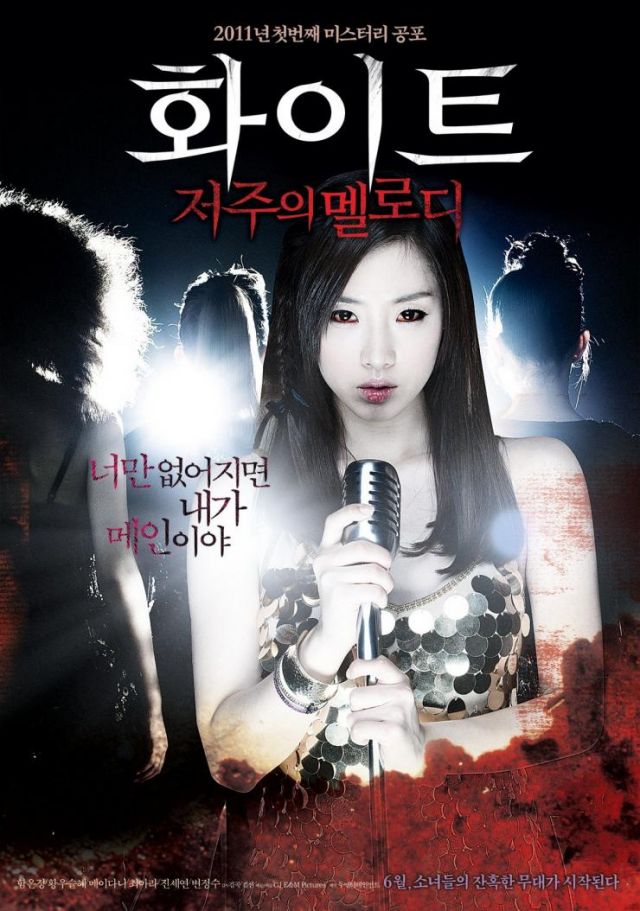 Behind all the glitz and glamour of the K-pop industry lies a darker truth. Where the competition is high and the fight for the spotlight is as cutthroat as it is with any capitalist industry. In "White: The Melody of the Curse", a struggling pop group battles the industry, each other, and a mysterious and deadly curse that torments whoever assumes to take the lead in the group.

"White", directed by Kim Gok and Kim Sun, is a K-pop horror film that suckles on all the dramatic stereotypes of the K-pop music scene. Inter-group rivalries, masses of screaming middle-schoolers, obsessive and cold managers, flashy stage performances, and much more is there to help frame the girl group's terrible tale of fame and misfortune.

The tittering girl group "Pink Dolls" have moved into a new studio where they hope to practice and record their next hit that will take them to the top. The film takes no time at all in showing us the conflict between the four members as bitchy comments are thrown around, but most are directed at their oldest member Eun-joo (played by T-ara's Ham Eun-jung). This ostracized, and former backup dancer, discovers a tape in their new studio entitled "White". A music video that just might have enough pep and jingle to pave the way for the group's success.

The rights to the song are unknown so, with copyright issues sidelined, their manager gives the nod for them to begin deconstructing the video for their next performance. A power struggle emerges between the girls for who is to be the leader of group. One by one the lead falls victim to strange and disturbing acts of sabotage that prevent them from continuing. Eventually, the girl group is reduced to just Eun-joo who deludes herself of the fact that the curse behind the melody is far from over.

"White: The Melody of the Curse" presents an interesting merger between the massive K-pop machine and the Korean horror genre. The film contains a familiar horror aesthetic that gingerly attempts to balance mystery and shock. Whether the directors achieved either of these is a moot point but fans of K-pop and Korean horror will mostly like appreciate the film for all that it claims to be.

"White" makes use of typical horror conventions with its quick cutting and flashes of ghostly figures. Blood drips, splatters, and consumes choice moments, providing just enough of a jolt as not to disturb its relatively young target market. While not as affective, the film's horror style is strongly influenced by "The Ring" both is execution and content. But again it's soft and the K-pop backdrop doesn't really allow the film to delve into the darker corners of performance horror.

I will be the first to admit that I am somewhat disinterested in the K-pop scene, even overly critical at times. Consumerism, the superficial posturing, undeserving fame, and image-orientated measures of success riddled my consciousness as I watched the film unfold. That being said, I found a number of themes within the film to cater to the cynic in me.

Consider the premise for conflict within "White", the recycling of another's work without much thought or moral consideration. K-pop has been accused of continuing to fill a mold with fresh new 'idols' that are younger and more beautiful. Freshness is not a label I would pin on the K-pop scene and the film suggests this with less subtly than you might think. They copy the cursed song, and its choreography, and then horrors and tragedies begin. The result is the downfall of their professional and personal lives. It is a simple observation but relevant all the same as the groups lack of originality is payed for in blood and destruction.

But the main theme has to be that of jealousy and envy. Those who are in the background are forever despising those in the foreground. Plotting and verbal torment is taken to the extreme as the sinister happenings result from this envious lust for the limelight. While watching the film I personally found the acts of 'real' individuals to be more horrifying than the paranormal ones. In fact, I think the filmmakers would agree as all the deaths in the film occurred as a result of living and not some transcendental force or spirit.

The fact that the most violent incidences involved the living, rather than dead, shifted the weight of the film away from the mystery it tried so hard to build-up. "Where did the song come from?" and "Who was the girl behind it?" are questions that the film itself renders unimportant as the last 10 minutes of the film faded away from all that was bolstered up and till that point. Soft was its ending, and viewers will forced to look back to find the climax they knew was there but lack the punch born out of the surprise/tension needed in horror. This limp denouement was all too noticeable, as the filmmakers might have struggled to find a synergy between content and flow towards the end.

"White: The Melody of the Curse" is an interesting film if you care to scratch its thick and over-based surface. It is not a film I enjoyed for its cinematics or frightening set-ups. Instead, I personally enjoyed some of the more subverted elements within the film that drew a large picture of criticism of the industry and the actors that play out in the K-pop scene.

"[HanCinema's Film Review] "White: The Melody of the Curse": K-pop Horror and Bloody Criticisms "
by HanCinema is licensed under a Creative Commons Attribution-Share Alike 3.0 Unported License.