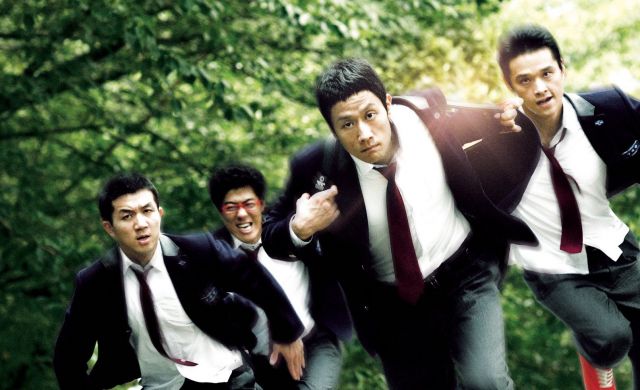 Jjang-goo (played by Jung Woo) is a normal high school student who wants to be something special, like a high school delinquent. The circumstances are perfect- this being the nineties, there's still a very corporal bent to the South Korean educational system, and Jjang-goo's school already has a local gang. The problem is, this gang doesn't actually do anything except generic masculine posturing. And Jjang-goo is such an unremarkable student he can barely even do that right.

"Wish" is apparently based on Jung Woo's actual high school experiences. Among other things this puts an interesting bit on his work in "Answer Me 1994" and "Answer Me 1988". To use another anachronistic comparison for this seven-year old movie, "Wish" also reminded me of "18 - Eighteen Noir", in that it is very obviously self-aware of the fact Jjang-goo and most of the other students are more interested in machismo image than actual machismo.

This is especially well-punctuated by the bizarre soundtrack, which consists almost entirely of traditional Korean vocals. Unfortunately I'm not knowledgable enough to confidently state whether this was shaman music, pansori or just an extended reference to some other cultural property I'm not familiar with. But the effect is unmistakable- the soundtrack constantly gives Jjang-goo's life a sense of dramatic urgency that is completely discordant with anything we see on-screen.

The ultimate effect is exceptionally bizarre. Much like how writer/director Lee Seong-han uses weird musical choices to try and turn "Wish" into something it is not, Jjang-goo attempts to turn his relatively mundane high school experience into something profound and meaningful simply by acting like a tough guy. Jjang-goo doesn't even want to be the main character in the high school gangster movie of his life. He's completely happy just being one of the background extras who hangs around looking menacing while an actual main character stands up front and gives the tough talk for some trivial slight.

Note that when actual gangsters show up, there isn't some horrifically tragic coming of age experience. Again, Jung Woo is a perfectly normal adult today, so we know from the start that he probably wasn't traumatized. Rather we find that real-life gangsters are actually...kind of boring. Sure, they get the headlines for breaking people's legs and stuff. But gangsters are essentially contraband businessmen who prefer not to antagonize clients unless absolutely necessary. They understand that real machismo is effective primarily as a threat- a reality Jjang-goo stumbles onto largely by accident.

"Wish" definitely gets a lot of points for sheer inventiveness. In between the strange musical choices and the obvious self-awareness on the part of both the characters and the production team about way these high school stories are "supposed" to go, "Wish" is a reminder that even before the Internet obsession with weirdly abstract ideals coupled with a desire to force a personal narrative out of life can lead to some very peculiar life choices. In retrospect, all we can really do is laugh and express relief that no one was seriously hurt as a result of all this idiocy.