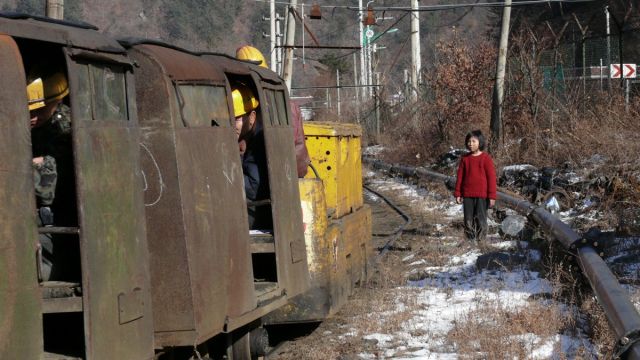 The village of Kanwon is slowly dying. Once energized by the mining industry, those jobs are drying up, and its employees are getting old. Yet for all this, life isn't necessarily all that bad. An early scene depicts a family playing with snow. Does the backdrop look generally bleak and desolate? Sure, but it's kids playing in the snow. What kind of a heartless person can't see the joy in that? Although that's easy for me to say. I don't have to live in Kanwon after all.

"With a Girl of Black Soil" eschews dramatic storytelling for a focus on proper imagery. There's little to no dialogue, because there's not much to say. Consider Hae-gon (played by Jo Young-jin). He's not given many life options except to slowly commit suicide by drinking alcohol, so that's what ends up happening. Well, mild spoilers, Hae-gon never gets that far, although his effort end up being circumvented through some rather unexpected ingenuity on the part of his young daughter Yeong-rim (played by Yoo Yeon-mi).

Note, by the way, that Yeong-rim is not a plucky precocious child archetype. She's just a normal kid who should be out playing with other kids, but is trapped by larger concerns. For all Hae-gon's efforts Yeong-rim knows that the situation is getting worse and that possible solutions are getting more fuzzy and indistinct all the time. With her father barely in the mood to talk, let alone give advice, all Yeong-rim can do is observe and try to help.

I liked "With a Girl of Black Soil" because it neither shows off sunny optimism, nor does it roll around in the muck trying to glorify how miserable people's lives are in rural South Korea. As we can see in the happier moments, Hae-gon is capable of joy, and was probably doing much better mentally back when his wife was alive and there was steadier work. The human spirit is indomitable and love can take people a long way.

But it can't go everywhere. Like with Dong-goo (played by Park Hyun-woo). He's retarded. There's absolutely no solution to that particular problem, and "With a Girl of Black Soil" never pretends like one is magically going to materialize. Even Yeong-rim doesn't delude herself like that, and she's still an elementary school student. All there are are patchwork solutions to get everyone through to the next day, and that's going to have to be enough.

Although I really shouldn't overemphasize plot here. The vast majority of the footage in "With a Girl of Black Soil" consists solely random rural town backdrops- dingy, yet sort of pretty, in their own inelegant way. At his best moments director Jeon Soo-il is reminiscent of Zhang Lu, except the story is distinct enough I don't have to grasp around helplessly trying to figure out what the imagery is actually trying to communicate. The message behind "With a Girl of Black Soil" is simple. The lives of those left behind by progress lack glamor, and at times even dignity. Yet they have their own distinctness. And sometimes, that's enough.

"With a Girl of Black Soil" is directed by Jeon Soo-il and features Yoo Yeon-mi, Park Hyun-woo, Jo Young-jin and Yoo Soon-cheol.

With a Girl of Black Soil DVD

"[HanCinema's Film Review] "With a Girl of Black Soil" + DVD Giveaway"
by HanCinema is licensed under a Creative Commons Attribution-Share Alike 3.0 Unported License.