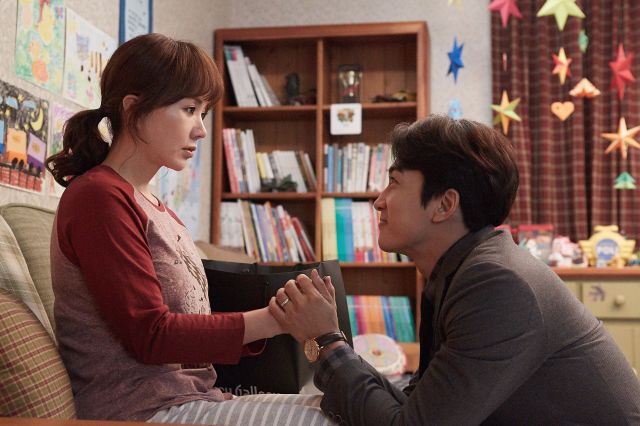 Having lost her parents at a young age Yeon-woo (played by Uhm Jung-hwa) resolved to become an unambiguous success in life so as to do honor to their name. And Yeon-woo succeeded at that goal...sort of. Most parents would be proud, of course, to have their daughter grow up to be a top tier lawyer, recognized by her peers, well-respected, and wealthy. The problem is that Yeon-woo's clients tend to be rich more than they tend to be decent human beings. That is the backdrop into which Yeon-woo falls into the "Wonderful Nightmare" of being an ordinary housewife.

On the most obvious level "Wonderful Nightmare" is a fairly transparent criticism of feminism. Yeon-woo "succeeded" in a man's world, but the problem is that success by that definition required that Yeon-woo do some rather repugnant and most definitely un-feminist deeds. The analogy is a perfectly apt one- Hillary Clinton took on similar cases in her legal career. Women lawyers in general are tapped for such cases precisely it's harder to accuse women of being misogynist.

But even just on a personal level Yeon-woo is generally just lacking in empathy. Yeon-woo finds that being a housewife, even for a limited period of time, to be demeaning and generally beneath her. Yeon-woo's general elitist attitude can also be interpreted as a criticism of empowerment issues in feminist discourse- how can Yeon-woo represent what women should aspire to when Yeon-woo herself seems to despise any woman coming from a different class background?

...All right, let's ignore the feminist angle for a moment. How is "Wonderful Nightmare" just as entertainment? Pretty decent actually. Obviously you'll have to suspend some disbelief regarding how Yeon-woo's new family doesn't suspect anything strange about her abrupt attitude change. But for me, at least, this was fairly representative of how easygoing they are. Take Seong-hwan (played by Song Seung-heon). As Yeon-woo's husband, he's constantly a good sport. Even on Yeon-woo's worst days, he accepts and loves her. Ignoring the creep factor of how Yeon-woo isn't really his wife, the sentiment's a sweet one.

And that's what "Wonderful Nightmare" is really, unambigously about- sweet sentiment. Yes Yeon-woo is pushy and tends to use her legal expertise as a cudgel against whoever happens to be in the way. But what Yeon-woo learns over the course of the movie is that her skills deserve a higher calling than running damage control for rich rapists. Yeon-woo can stick up for people who would never had a chance otherwise- so why doesn't she?

I imagine some readers will find this entire set-up too utterly maudlin to stomach. I probably can't blame you too much- "Wonderful Nightmare" doesn't even really have a plot so much as it just features Yeon-woo adjusting to her new life and realizing that the road she did not take also had value. A family doesn't destroy amibitions- it can inspire or change amibitions, but how worthwhile were Yeon-woo's ambitions in the first place anyway? Didn't it all just come down to familial issues? When that much is taken into account, "Wonderful Nightmare" is a fairly effective argument for how radical change isn't as a terrible as it may initially seem.