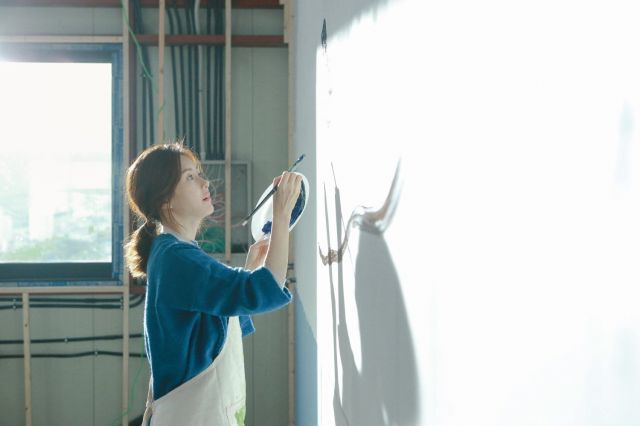 Three different women, all named Woo-joo, exist in about the same continuum when it comes to life choices. The thirty-something Woo-joo (played by Kim Ji-soo) is an entrepreneurial mother, who has given up a life centered around aesthetic appreciation for the sake of something more stable. The twenty-something Woo-joo (played by Huh Yi-jae) is debating how deep she wants to go into more romantic life goals, now that she better knows the emotional impracticalities. The teenage Woo-joo (played by Yoon So-mi) is also oddly hesitant about following her dreams, even though she's just starting out.

All three Woo-joos feel like alternate points of the same life, which frequently gives a very confusing effect to "Woojoo's Christmas", as if the thirty-something Woo-joo is somehow physically in the same room as her flashbacks, while also fairly consistently not making an attempt to interfere with the life choices of her past selves. This is principally because "Woojoo's Christmas" is a reflection on past actions- and specifically how past situations don't change quite as much as like to think.

The dreamy aesthetic of "Woojoo's Christmas" has a lot in common with "Architecture 101", even if the overall moral thrust ends up being the exact opposite. Observe how even if the thirty-something Woo-joo is technically the most adult of the three, their personality and temperaments are almost identical. The choices made by the Woo-joos depend largely on personal circumstance and the passage of time rather than experience.

The not-exactly-flashback scenes prove baffling precisely because all the Woo-joos express similar levels of doubt and skepticism, even though only the oldest Woo-joo has any tangible reason to have such beliefs. This makes rationalization for the thirty-something Woo-joo a difficult task. Even in the present day, the thirty-something Woo-joo still gets ambiguous results from difficult choices as the result of incomplete information, much like her younger current-day metaphorical equivalents.

Watching "Woojoo's Christmas" is rather like watching a nostalgia filter play through backwards. All three of the Woo-joo's are shown to have a great deal of agency in their life situations, such that from the thirty-something Woo-joo's perspective, it's impossible to see her own life as anything except the culmination of her own deliberate, questionable choices in life. Those moments are quite humbling, especially as it calls to mind our own rationalizations in life, making the viewer realize that I, too, had plenty of say in my own destiny.

But "Woojoo's Christmas" isn't all existential gloom. While it's easy for the thirty-something Woo-joo to obsess over the choices of her metaphorical past selves as being the cause of bad things in life, there has been plenty of joy as well. Consider her final journey to the gallery. Woo-joo, in Korean, also means universe. Woo-joo, as a person, is all-encompassing, and taken in broad perspective, there isn't just paradox of choice. There's genuine beauty and joy at the huge mosaic in life. Beauty is in the eye of the beholder and Woo-joo, too, is and was beautiful, precisely because of her own complicated, wonderful ambiguity.