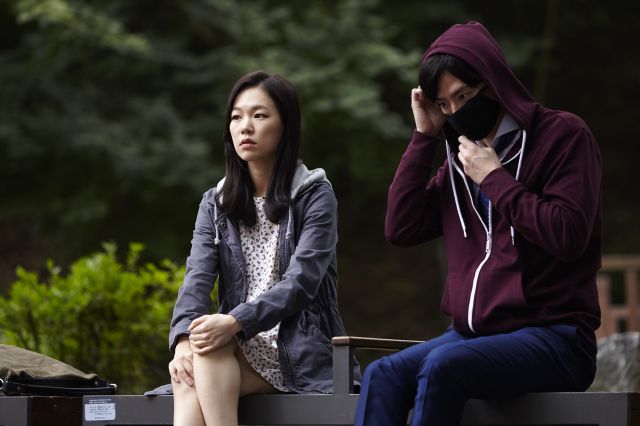 ...So last week it was three movies about Jeju Island, and this week it's three movies about actors. Weird. Not relevant to the movie itself, of course, but I felt I should at least acknowledge that. Anyway, in "Worst Woman" Eun-hee (played by Han Ye-ri) is an actress who's really not all that bad. In fact, it would probably be pretty accurate to say that Eun-hee causes most of her own problems by just being consistently disingenuous. Japanese novelist Ryohei (played by Ryo Iwase) confounds matters because the books he writes are about women like Eun-hee. Also they aren't all that successful.

Yes, "Worst Woman" is one of those movies- about people who have little luck with what they do in life and aren't completely sure how to react to that. It's easy to chuckle at the small failures Eun-hee and Ryohei run into, and contrast them with our own failures in life. Eun-hee and Ryohei originally strike up a conversation in basic English just out of the happenstance of having met each other but the more we see of their actual day-to-day errands, the clearer it is that they're looking for an escape.

For Eun-hee the issue is having boyfriends who she obviously does not like very much. I often wonder how people even get into relationships like that. When Eun-hee says mean things...well, it's not like she's being vicious or anything like that, but her tone connotes an obvious lack of respect. Is that why Eun-hee is the "Worst Woman"? Because in the perverse world we live in, men find that attractive somehow?

Ryohei is a somewhat better person, in that he does not appear to be a bad person so far as we know, yet his story runs into the same basic problem that Eun-hee's does- technically it's pretty pointless. While there are hints that Ryohei's writing goes beyond that and is even explicitly sadistic, I'm more inclined to see it as staring in the face of the human condition just for novelty's sake.

For all the work director Kim Jong-hwan goes to in establishing that the characters are unsympathetic or standing in place, "Worst Woman" is a surprisingly benign experience to actually watch. For this I credit the soundtrack, with its endless smooth lounge music. Even though almost all of the action ends up taking place on a long mountain walk, the aesthetic is that of a quiet club where it's easy to have an uninterrupted conversation.

The only problem is that this conversation establishes little more than the bare facts laid out right in the beginning. That Eun-hee is not a particularly good person, and that Ryohei write novels about people who are not particularly good. Even the ending, happy though it technically is, does not conclude any narrative arc. It's just, this is who these people are, that face tomorrow, an experience which probably will not kill them. And I suppose that much is useful for perspective. Even if you are the "Worst Woman" in the world, odds are you don't lose much of value even on your worst days.