[HanCinema's Film Review] "You're so Precious to Me" 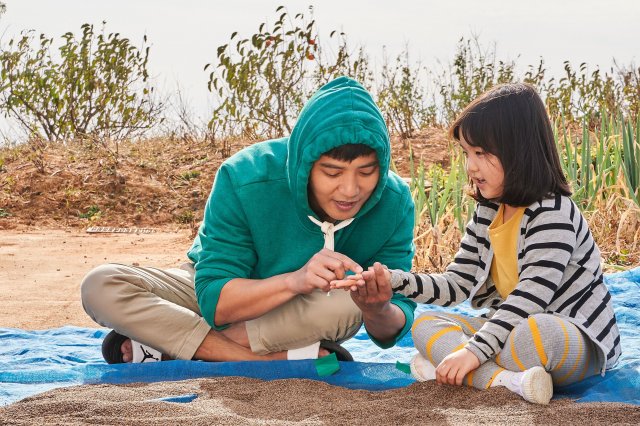 Jae-sik (played by Jin Goo) runs a small time agency where the work, as far as we can tell, involves driving around a bunch of women wearing appropriately festive clothes to promotional events. It's not much of a career but Jae-sik and his women are bound by debt and don't have very many better options. The tone takes a turn for the dark when one of Jae-sik's women dies, and Jae-sik arrives at her home to find Eun-hye (played by Jung Seo-yeon), a little girl who can neither see nor hear.

"You're so Precious to Me" is an unapologetically sentimental film, although it does deviate from formula in a few rather undramatic ways. Perhaps the most obvious one is that Jae-sik isn't really ever presented as a bad guy. We can see that the man genuinely cares about the welfare of his employees. Despite initially being motivated by money, Jae-sik finds himself drawn to Eun-hye's fate due to sincere concern over her welfare rather than his own self-interest.

And there's something so very effectively alien about their initial interactions. At first Jae-sik just thinks Eun-hye is rude. But there's something oddly animalistic in her movements, as Eun-hye lumbers out from under her desk to grab a piece of bread. It's the only life she's ever known, and it's genuinely bewildering when Jae-sik finally, accidentally, makes a movement Eun-hye can clearly perceive, only to predictably terrify the little girl when she realizes Jae-sik isn't her mother.

It's hard not to feel for Eun-hye's situation. Jae-sik can't even so much as explain what happened to her mother. I kept holding out hope that Jae-sik would figure out a way to teach her braille or something, but as the movie's closing titles remind us, there aren't that many children in South Korea who are both visually and hearing impaired. Social services aren't set up for them. Like Eun-hye's mother before him, Jae-sik is left to bumble into dubious solution for inherently unworkable problems.

None of the conflicts presented in "You're so Precious to Me" are ever effectively resolved. This is for the better, really. While Jae-sik and technically Eun-hye's debt problems are quite real, "You're so Precious to Me" is at heart a story about their very pure emotional bond. The final extended scene quite literally just consists of Eun-hye repeatedly wailing and begging for the return of her father.

It's painful to watch, and that's the whole point. Being a parent is hard work. Yet we never feel like Jae-sik really has it in him to cut and run. For all the mistakes Jae-sik has made in his life, he sees Eun-hye neither as his redemption nor as a pathetic martyr. Jae-sik stays with Eun-hye because she reminds of his employees, the closest thing Jae-sik has to friends. So it is that the second half of the movie, with its movement to the countryside, is less fetishism of pastoralism as it is acknowledgment that people should live in a way where they feel happy and needed.