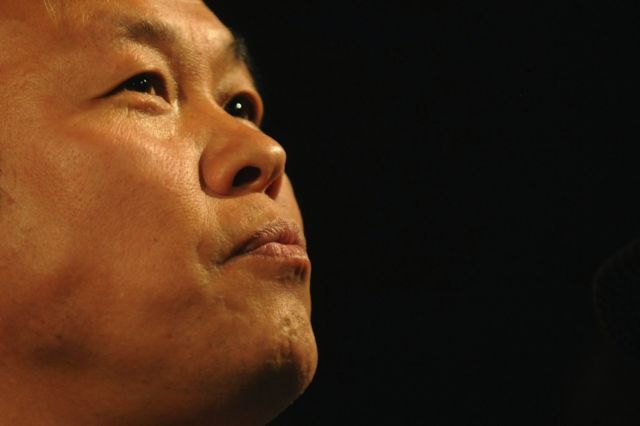 Kim Ki-duk is sitting in a tent, in a cabin, crying. He is watching one of his young protagonist struggle to drag a sizeable stone up to the highest peaks that surround his isolated island monastery. Over treacherous frozen ice and up steep embankments of shrubs and loose rocks the monk climbs. This is a scene from Kim Ki-duk's 2003 film "Spring, Summer, Fall, Winter... And Spring"; a story that, like so many others of Kim's films, was a deeply introspective tale that captured Kim's imagination and spirit. In "ARIRANG - Movie" Kim Ki-duk turns his Canon Mark II on himself and confesses his "life as a director and as a human being".

Kim is huddled in a grey blanket against the white interior of his tent. In this moment there is little visually that separates this awarding winning filmmaker and the cold and hard struggle of the young monk powering through the frigid mountainside. Kim seemed on the verge of tears throughout this 'scene' and when the monk eventually drops his prized statue on his ascend, the personal pain Kim seemed to feel as a result of this was palpable. There was nowhere to hide within his small rural dwelling, and throughout the film Kim shifts between disturbing emotion states and their accompanying revelations as he attempts to document his own journey of self-psychology and repair.

Kim Ki-duk as a Korean auteur has always existed more in the international arena than in his home country. Festivals around the world have honoured, and will likely continue to honour, his efforts and achievements in the realm of cinema. Kim Ki-duk had, as he continually reminds us, produced 15 feature films before his devolution into madness; many of which have been dosed with awards from Cannes to Berlin. Even today his latest film "Pieta" was praised at this year's Venice Film Festival, and it was also chosen to be Korea's official entry in the 2012 Academy Awards "Best Foreign Language Film". Yet the film has failed to even reach a million admissions in his home country, a place that recently awarded "The Theives" the title of the most successful Korean film as it claimed more than 13,000,000 admissions and is still going.

Kim himself admits that these award ceremonies were a special time for him, despite the fact that his films are often not box office blockbusters, or even relatively successful with Korean audiences. With "ARIRANG - Movie" Kim has forced himself to examine his filmography, the industry and players in which those films came to be, and his own philosophy on life, art and cinema.

Throughout the film Kim despairing sings Korea's unofficial national anthem of Arirang, the title of which has no direct modern definition and seems to be as illusive in meaning as the Korean philosophy of Han. The song accents Kim's journey as he describes life and its hardships, equating years to the continual rise and fall of Korea's mountain ranges. Fitting, and perfectly poetic as Kim visible struggles between himself and word and culture he finds himself in.

The decisions to eat ramen, drink filtered coffee, and bury one's own excrement for a time must not have come easy. Still, it has to be said that Kim is by no means suggesting he was 'living off the land' as it were. A cake box from the popular Korean bakery chain Paris Baguette can be seen, let alone the crisp white gleam of his large Apple monitor and computer. I think that "ARIRANG - Movie" makes no claim to conceal or elude the viewer of its self-reflexive form and purpose. It is, rather simply, the video diary of mad man.

A knock at the door manages to alert Kim and hints at there being perhaps someone else beside Kim in the film, but each time the entrance to his cabin is vacant when he checks. This happens a couple more times as Kim fails to discover who it is who is tormenting him all the way out here. Like the ghost of Christmas past present and future, Kim is 'visited' by a number of different dimensions of his self. In addition to the 'ding dong ditch' Kim, Kim is visited by himself, in flesh and form, and his own shadow perhaps being the most agreeable of the three.

He shows us his 'other' self shouting and swearing at him for being weak and failing. Then he cuts to the reaction shots of himself looking thoughtful; when it is 'his' turn to speak he does so, and through the process of responding to his own self-criticisms, the man is never seen again-except in the very next shot.

His shadow is next to appear and ask him questions, but this time it is Kim who does most of the talking. The post-modernistic techniques that make up this scene are intriguing enough to fill a few more pages than I am able to give here; but its irony and seemingly paradoxical portray can be almost inexhaustibly examine as the man who is usually behind the camera becomes an actor. An actor whose role is as complex and fragment as Kim's own mental state at the time of his confessions. "Have you ever been questioned by your shadow?" he asks.

Another very revealing question Kim poses is: "How to shoot questions at myself without knowing the answer". A very interesting choice of words if you consider Kim wishes to cast away his demons by "shooting" them with questions. As if the very process of talking to troubled aspects of yourself could bring about change, a metamorphosis, and transformation of the self. But talk and vanquish he does the man in the mirror, and the shadow man on the wall, but the man at the door still plagues him. He needs to find him, and "shoot" him, in order to circumvent his human condition of depression and suffering.

He is making a gun. Perhaps it was ordered online or delivered by a friends; purchased in secret for perhaps kept for that darker outcome if he himself could walk away; a sceptic might have other thoughts on the matter as well. He cleans and pieces all the little metal plates and springs together, all the while the montage capturing his determination while simultaneously fuelling our own dark wishes for what he might shoot. "Why is life do sad and depressing every day?" he asks himself.

The man who was knocking at the door never made himself known, by we know and Kim knows who he his, and he must be shoot. Kim eventually gives himself leave from the country prison to visit a few unknown individuals. He walks into a number of buildings while we hear him sing: "Arirang, Arirang, Arariyo, Arirang over the Hill we go". A single shot is fired at each location and he moves one, and at that moment I was reminded by his early words "[I] need to shoot something to be happy...so I film myself".

"ARIRANG - Movie" is fragment and dreamy journey into the works and mind of man who is destined to either live atop a mountain or on an island surround by them. Like his protagonist in "Spring, Summer, Fall, Winter... And Spring" Kim is struggling to find a place in the world and in an industry he deems in conflict with his own sense-of-self and aspirations for the medium. In "ARIRANG - Movie" we are granted access to the psychoanalytical video diary of a madman. Documenting not only his fears and afflictions, but also his recovery and triumph over them.