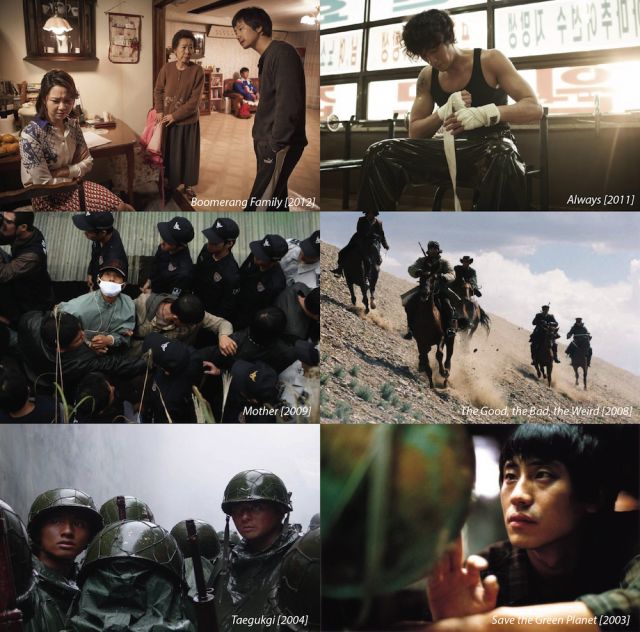 "Snowpiercer" hits Korean cinemas August 1st and will make Bong Joon-ho the third Korean director to be showcasing a Hollywood feature this year. The film has an interesting and exciting cluster of Korean talent and studios on board - all of which have worked together successfully in the past. Here though I wanted to draw the eye through some of that prestigious Korean talent and showcase the keen 'eye' behind "Snowpiercer".

The film stars Song Kang-ho, one of Korea's most prestigious acting talents who has been a huge performer in Bong's impressive filmography; mostly notably in "Memories of Murder" (2003) and, the highest grossing Korean film of all time, "The Host" (2006). One of "Snowpiercer"'s producers has also made fairly good use of the 46-year-old actor. Park Chan-wook continues to cast Song in his films, most recently "Day Trip" (2012), but he's also starred in "JSA - Joint Security Area" [2000], "Sympathy for Mr. Vengeance" (2002); "Sympathy for Lady Vengeance" (2005-cameo); and "Thirst" (2009).

The film was adapted from the French graphic novel "Le Transperceneige" (by Jacques Lob and Jean-Marc Rochette) and outside of TWC the Czech studio 'Stillking Films', "Snowpiercer" retains a lot of its Korean production power (via CJ Entertainment, Moho, and Opus Pictures) as well as star power.

In preparation for "Snowpiercer"'s premiere in Korea, you could do worse than revisit Bong Joon-ho's incredible filmography, or perhaps even your favourite Park Chan-wook film. Having seen the film's epic new trailer however, I would suggest revisiting the films that credit Hong Kyung-pyo – "Snowpiercer"'s cinematographer.

"Snowpiercer"'s trailer contained some incredible moments carried by some very dynamic camerawork and framing. I think we are going to see a lot happening across different planes, with Hong favouring closed, here claustrophobic, framing of tight action and gritty drama. Hong is no stranger to filming frantic crowds in close-quarters, he was the keen-eye on the set of the war epic "Taegukgi" (2004) and was behind the glass in Bong Joon-ho's "Mother - 2009"; where he framed Do-joon's arrest and re-enactments with a similar toolbox he seems to be drawing from for "Snowpiercer".