[HanCinema's Film Talk] Robots and Technology: What does Kim Jee-woon fear for the future of Korea? 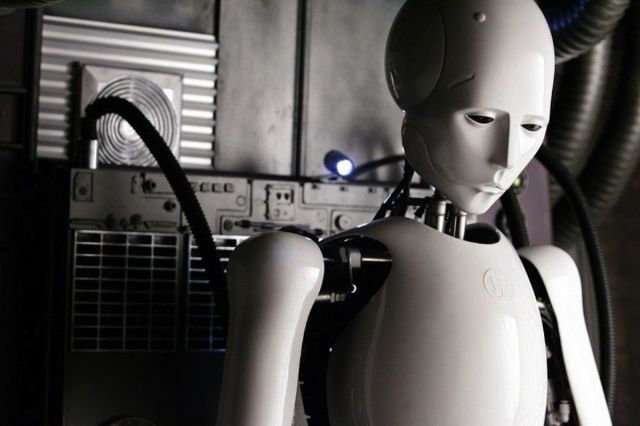 "All these stories originate from the earth. From the very earth you live on". That is the final line of the official description of the omnibus film "Doomsday Book". The film contains three stories of how mankind would perhaps bring about its own apocalypse. In Kim Jee-woon's "Creation of Heaven" this theme of self-destruction is placed against the backdrop of technological advancement as a product of human effort and imagination. In Kim's version, mankind's fall seems to share its destiny with technological advancement, all the while asking hard questions on issues of morality, spirituality, and being in the near future.

The film contains some heated dialogues (though experienced more like monologues) of lengthy popular rhetoric over mankind's perceived power of its creations. All the while the robot(s) in question remains silent and appears to just be processing all that was being said. 'RU-4' is his serial number, but that's not what the Buddhist believers at the temple would call him. They would claim him as Buddha himself reborn, his nirvana achieved and form found in this 'defective' robot/android.

The title of this short is "Creation of Heaven"; an interesting headline to a film that pokes around the future of religion and society. One does not need to look very hard at the film to say that RU-4 does indeed appear to be the genuine article, as in him we see nothing but thoughtful words and timely action. In one key scene, when he does finally gather his reflections, the camera slowly changes its angle to paint RU-4 against Buddha himself. It may be a little heavy-handed, but in this short format such compositional considerations tend to enrich rather than intrude on a film's enjoyment. Kim has chosen this religion and its all its orientations to critique the notion of progression, even evolution, of being and consciousness. Kim's 'apocalypse' is depicted as not the result of an external threat or outwardly expressed 'flaw' in our collective make-up, but rather an internal examination of our perception and knowledge of this new future world.

Kim's has cast his imagination forward and has come back with RU-4, a white

android forged by man who has seemingly surpassed us spiritually. His face is expressionless and there are two pools of black where its eyes should be. His lips are fixed in a strange frown/smile, the uneasiness felt from which is only compounded by the streaks of blue light that accompany his digitised speech. His white body is made of sheets or panels, leaving the joints between them open as his mechanical frame and hydraulics are put on displayed for all to see. His white, emotionless state is consistent with one's archetype of a truly spiritual leader, one who can stand with and above us as we walk the road of enlightenment.

RU-4 falls somewhere in the 'uncanny valley' that leaves you unsure of where on robot-to-human scale he actual lies. His humanoid elements allow us to at least be receptive to his actions and presences on screen, as his level of 'likeness' titters to one side of the valley. However, the features that we define as human on him (face, body, speech, etc.) exist on a very basic symbolic level. Eyes are simplified to two black holes in a shapely head and the nose is but a well-crafted mould above the mouth. RU-4's physical characteristics and character are in conflict in this film, as it is not the knowledge or spiritual awakening that is the threat, rather simply the source.

To better understand how Kim has portrayed robots in this film, it should be interesting to see how other robots in the film are depicted. In addition to RU-4, there is another 'R200' robot that was saved from the extermination team by the head monk at the temple: "That is not necessary. This robot is still useful in our temple". This model seems to lack the ability to communicate, and as such our emotional investment towards him lessens. There is also a robot dog that the engineer tried to fix, however here the robot lack any spatial awareness and the ability to engage in the world with any sense of itself. Leaving it to be dragged down the hallway and, ultimately, dumped in the trash. Although here we still feel a small degree of sympathy for the cute little dog toy, it's a shallow and fleeting feeling at best. Interestingly, the head of the organisation that wants to terminate RU-4, has his position of robots very clearly pinned to him from his very first scene. He rides a highly responsive, non-communicative electric chair that he does not even need. It carriers him from one location to the next, and was denied by its creator the blessing of awareness and communication, reduced to, quite simply, a tool.

After struggling to handle the first callout to the monastery, our engineer, Park

Do-Won, is seen playing with a remote controlled robot spider. This scene requires a little retrospection here as Kim attempts to layer his film one last time before the time runs out. A robot controlling another robot for fun? This robot spider is but a puppet to be controlled or toyed with, its serves only to amuse. Ironic, naturally, that Kim has this scene caught in a moment of deep reflection for this character, as he appears to be struggling with the events around him. The viewer can acknowledge his struggles, but again like RU-4, we don't have enough information on him to commit to an emotional attachment. If there was every any clue in film that he was, in fact, a robot himself, I believe it can be found here.

Out of all the robots and pieces of technology that can be found "Creation of Heaven", perhaps the most relevant to Kim's message is the contradiction between the engineer Park Do-Won, and the enlightened android RU-4. Kim's big reveal at the end of film may leave you feeling like you've been cheated, as I did, but again I was willing to give him the benefit here. Although the engineer and RU-4 lie in very different areas along the 'uncanny valley', both their fates are linked to Kim's idea of a higher consciousness and being. However in the case of the engineer, his character is more one of transformation than conviction. This way the engineer's decision to give new life the abandoned robot dog has a little more weight behind it then the RU-4 decision to self-terminate. This is because the engineer had to undergo a transformation of self, as he reacted and internalised the events revolving around the Buddhist android. The irony of this robot declaring another 'defective', even getting aggressive about it, suggests that Kim is planting the idea that this intangible moral values can be achieved through growth and knowledge, and not just through inherent conditions or pre-existing modes of being.

"Doomsday Book" is definitely a thought –provoking film, with Kim's "Creation of Heaven" probing deepest into where we will most likely fail as a species. This short stood out for me in the film and despite some of its more obvious flaws and hiccups, the piece still manages to stay on track as Kim paints us his rather introspective doomsday scenario. 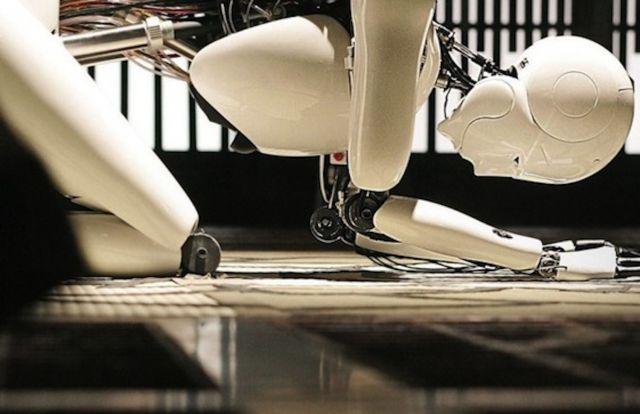