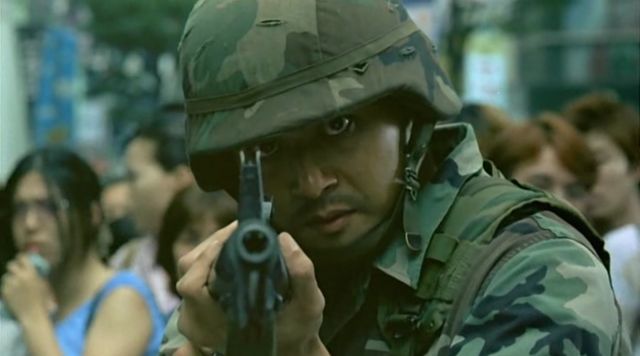 In the spotlight this week: Kim Ki-duk's "The Coast Guard"...

Kim Ki-duk's eighth feature "The Coast Guard" was released back in 2002 and follows a young private and his platoon along Korea's east coast. The film won the FIPRESCI (International Federation of Film Critics) prize for Kim's "strong and innovative depiction of the illusion of power which destroys humanity on both sides of the fence". In typical Kim Ki-duk fashion, "The Coast Guard" is an introspective and character-driven piece that moulds trauma, tragedy, and madness into a gripping feature that should not be missed.

Jang Dong-gun plays private Kang, a dedicated and skilled platoon leader who, along with a small contingent of fellow servicemen, patrols Korea's east coast near the DMZ. The beaches they monitor are 'open' during the day, but these young men have orders to shoot first ask questions later at anyone seen on the shore after sunset. The men train hard and play hard but by night they patrol the fences and man their beachside nests in the hopes of spotting a spy to spray: a sought-after accomplishment that heralds anyone who spies, then kills, a spy as a hero, even if the beach-walker isn't an enemy of the state.

One night, after putting away a few drinks, a young couple venture out past the barricade to get busy on the beachfront. They bypass the sign signalling the military's mandate and tumble behind a small dune. But private Kang spots their bobbing bodies and, as per his orders and will, opens fire. The man in missionary is pumped with hot lead as his wife-to-be (Park Ji-ah) watches his body being ripped apart by the trigger-happy hero's bullets. She screams behind the safety of the dune and soon after plummets into acute madness.

After realising the true nature of his target private Kang is stunned, but he's still rewarded with time off by his commanding officers. The traumatic nature of the ordeal strikes both Kang and the woman. Her descent into madness is sudden and sure, his, however, is cruel and prolonged. Kang, unable to fully process the killing, slowly losses his grip on reality and starts acting dangerously erratically. This leads to him being dismissed from his military duties, a decision that he's unable to accept and so he tries to return to his former platoon with bloody consequences.

"The Coast Guard" is an ideologically charged piece that paints an all-too-human dimension to the greater conflict in question. There is no individual antagonist here, just the military's delusional commitment to face-saving feats that fly in the face of human decency and rationality. Kang's 'hamartia' (his eagerness to succeed) ultimately threatens the very souls he pledged to protect; an ironic and telling turn that constitutes the film's controversial impetus. Kang's clear PTSD is largely ignored/unrecognised by powers that be, and it is this lack of intervention/acknowledgement that spurs the twisted tragedy Kim imagines before us. "The Coast Guard" is a brutal critique of mental illness, the military, and modern morality that's classically Kim.