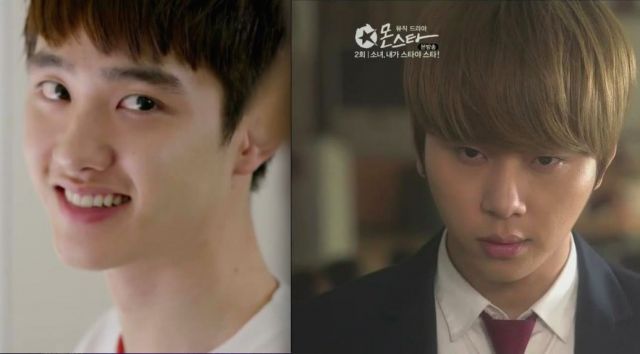 New actors come and go, especially in the wave that is Hallyu. Talents and beauties cross art genres all the time, whether at the behest of their companies, or because they feel compelled by the desire to succeed in a new challenge. Many new idol actors dabble in acting to get their name out onto the market, which is most certainly true of the two young men to be featured. Most of these idols do well. Some find they have an affinity for it; others find that they should remain idols. A few show a natural charisma that makes them the diamonds in the rough. Two of those who show that charisma are Yong Jun-hyung from Cube Entertainment's highly successful Beast; and Do Kyung-soo, better know as D.O. from the incredibly famous SM group, EXO.

Both of these young men had ample stage and television experience before they dove into acting. Their idol groups performed, toured, appeared on music shows, talk shows and much more. This experience prepared them some for speaking in front of the camera. What makes these acting rookies special is how comfortable they appear on screen whether or not they felt comfortable. They were able to fully transform into their characters.

Yong Jun-hyung made his acting debut in MNET's "Monstar" as school-aged idol, Yoon Seol-chan. A role such as this the usual acting fare of idol actors. What makes Yong's performance stand out from other such actors in similar roles is his magnetism and timing. He has a natural gift for line delivery that captures the innate sentiments of dialogue. What he brings to a scene is an intensity that cannot be taught. Of course with time, he'll be able to tame this intensity to match the finesses of the older, more experienced actors with which he was fortunate enough to work. As Seol-chan, Yong was endearing and definitely carved a solid foundation for himself in the acting world.

Then we have D.O. in "It's Okay, That's Love" as the winning hallucination of Jo In-sung's Jang Jae-yeol. Again, we have an idol who plays a school-aged boy, but D.O. lucked out in landing a role that had nothing to do with music. The role as Han Kang-woo had every to do with being the embodiment of pure emotion and poignant memory, which does not provide the same crutch as a music-related role does. His character was the imaginary friend of veteran actor Jo In-sung. D.O. was able to absorb the calm, masterful energy of Jo and channel it. What he has in his acting that builds upon Yong's performance in "Monstar" is that he can tamp down the amount of emotional energy he releases. He was also able to mimic Jo's timing and physical actions. D.O., on top of having a natural ability to convey meaning and emotion through dialogue, can also convey it through body motion. Unlike his confident, smooth stage person as the main singer of Exo, Han Kang-woo was a scrawny, awkward boy with little self-esteem. D.O'.s movement and facial expressions match the raw energy he has as an actor that make him convincing.

These two young men have loads of talent in music, and in acting. I would love to see them develop their small screen acting skills even further.


Written by Raine from 'Raine's Dichotomy'