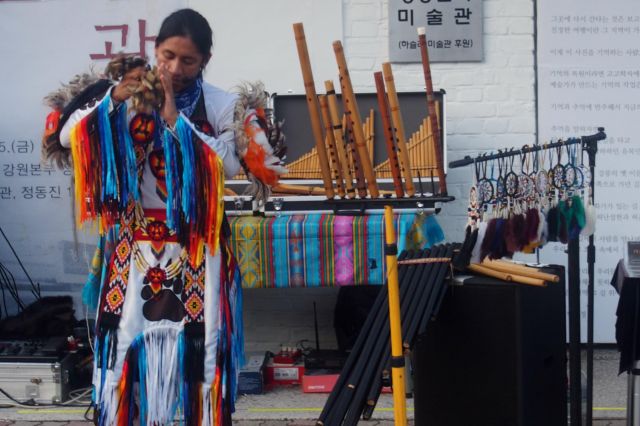 I came to Jeongdongjin, a region in the southeasternmost part of Gangneung's city limits, for the Jeongdongjin Independent Film Festival (JIFF). About the last thing I was expecting to see was Kawsay, the native Ecuadoran band featured in "El Condor Pasa - 2014", hanging around outside the local train station doing street performances and selling their various wares. It was a pretty dumbfounding moment, realizing that they do in fact wander the Korean countryside at random. Well, seemingly at random. They have a Korean manager and I presume they do at least get invitations rather than just showing up unannounced. 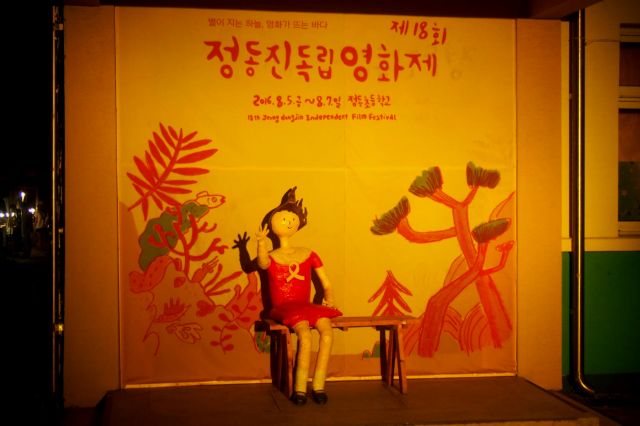 Anyway, the festival itself is...not that easy to photograph. Jeongdongjin is a small community that lacks anything remotely resembling a movie theater. The main selling point of JIFF is that it takes place entirely outside underneath the stars late at night. Still, it was nice of them to include this mildly creepy photo zone just so various tourists could prove they'd been there. 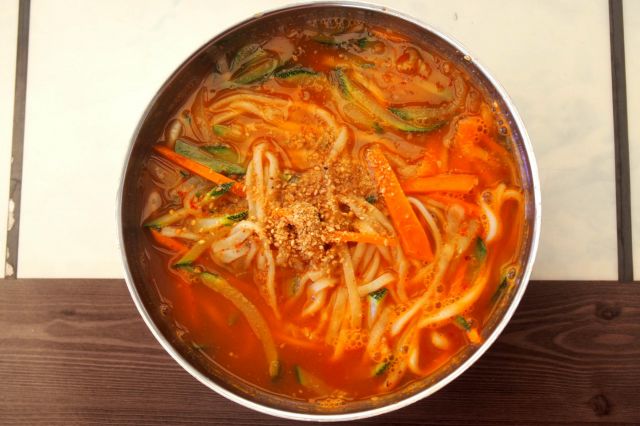 The food in Jeongdongjin is nothing all that special. This is a kind of Jjambbong (짬뽕)- seafood with vegetables. You can find it practically anywhere in Korea, it's just fresher when the ingredients come from the ocean nearby. 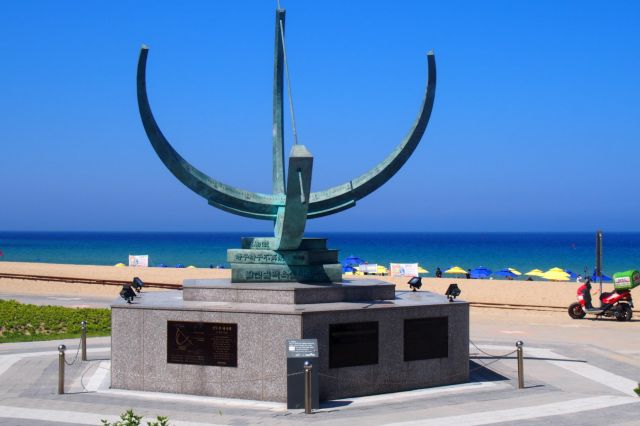 This is a sculpture from Jeongdongjin's rather modest Sand Clock Park (모래 시계 공원). The central gimmick of this park, so far as I could tell, was that it contained large monuments in the shapes of obscure clocks whose timetelling mechanism is not all that clear. While it appears to have been designed with tourists in mind, by and large this just looked to me like another perfectly ordinary public park used by locals for their own general amusement. 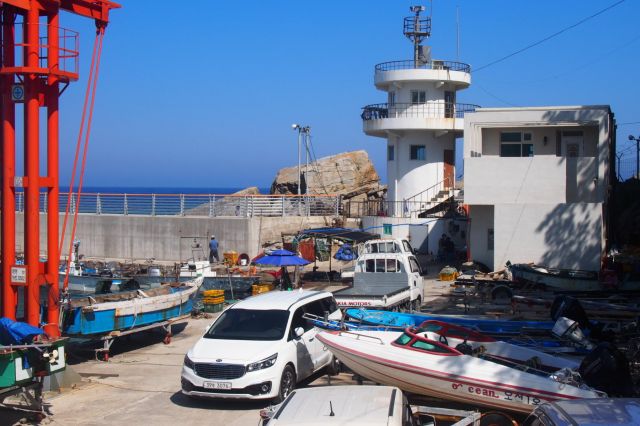 Locals who, aside from the more obviously tourist-oriented industries, are generally engaged in ocean-related...stuff. I spend way too much time exploring weird little nooks and crannies like this. While this small port is easily visible from the beach (or parking, for that matter), it's just a generally random collection of junk, all with its own perfectly valid utilitarian commercial purpose I pressume. 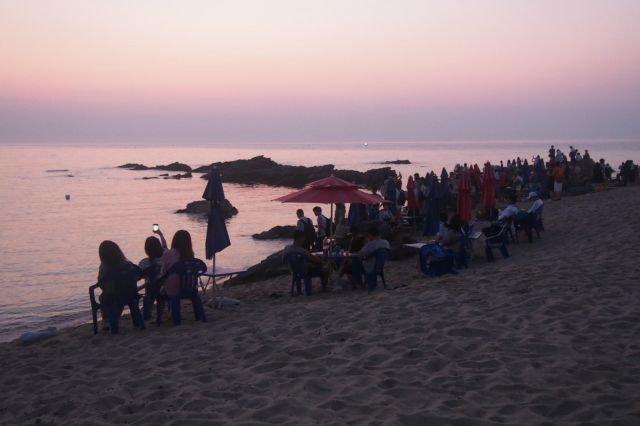 But about that tourist industry- its reputation is quite well-earned. Jeongdongjin boasts what are probably the singularly the most beautiful beaches in South Korea. It's mind-boggling the sheer quantity of people who will come out at the crack of dawn just to get a good look at the sunrise. What's even weirder, though, is that this is pretty much the highest number of people you'll see at the beach here at any given moment. Jeongdongjin is just well known enough to have a great reputation while being just tucked away enough that a decent though not excessive number of people will hang out there. It's a bit of a widely shared secret. 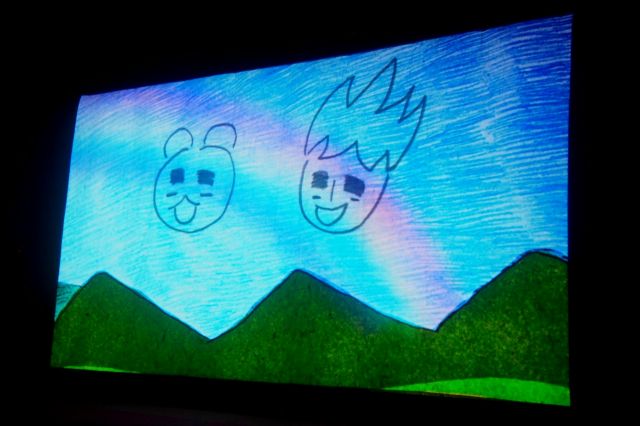 Much like the film festival itself. As blisteringly hot as the day was, it was surprising how cool the night was, to the point of even being chilly. The inherently optimistic nature of the festival was also a spot of decent cheer. The opener for every JIFF screening was a short animation that involved, among other things, a rained out screening miraculously coming up with a rainbow at the last minute so everyone can enjoy the show. 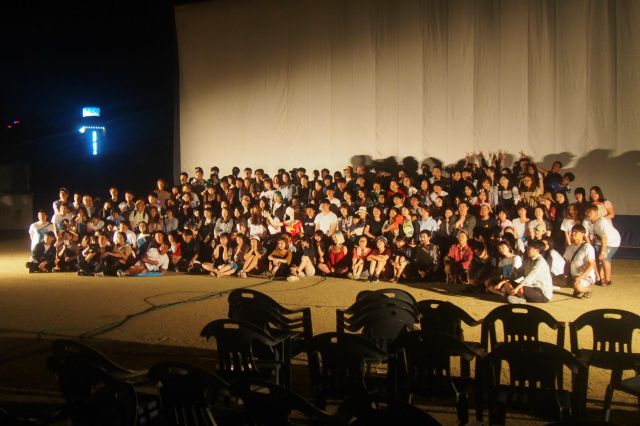 And come out they did. This is the final Sunday night group photo. Bear in mind these are just the people insane enough to stick around all the way through the final screening, which ended close to midnight. I only had just barely enough time to catch the final late train to take me back west, to a town with something more affordable than hiked-up guest house fees. Not that I can blame the high season surcharge. It's all a matter of supply-and-demand, and when a township can scrape together the sponsorship fees necessary to run an outdoor film festival next to one of the greatest beaches in the country, well, local guest house operators can charge pretty much whatever they want. 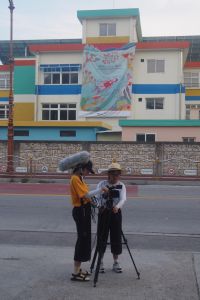 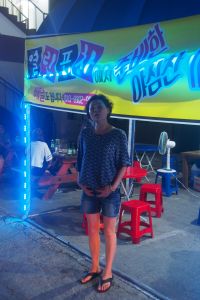 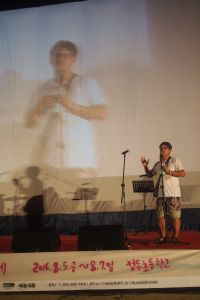