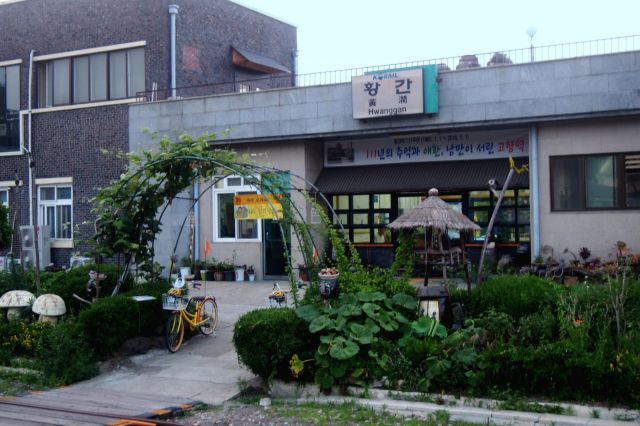 Located to the north of Muju in an area that's about as remote, Yeongdong is...well, about as uninteresting to be entirely honest. In terms of local flavor this railway station was the last place I visited and it was by far the most distinctive. To be fair this is a pretty fantastically well laid out railway station. The landscaping is beautiful, and the entire property is surrounded by poetry pottery. 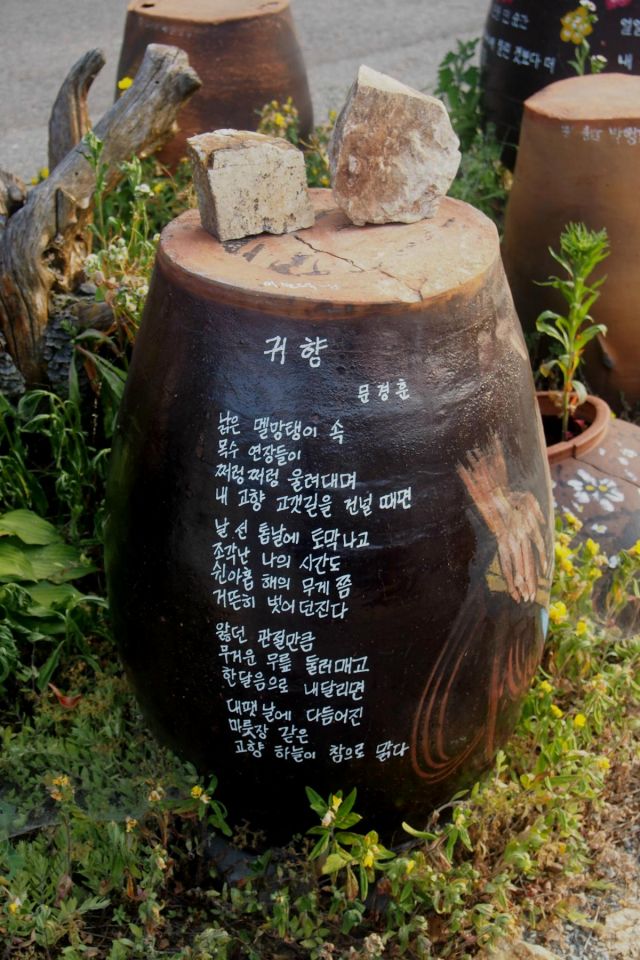 ...Which is exactly what it sounds like. Pottery with visual decorations and poetry written on it. This one uses metaphors mixed with literal natural imagery to create a portrait of the sense of ease a person feels when their hometown is invoked. The writing is just elaborate enough that I'd rather not butcher it with a subpar translation. Just know that the poem is about as beautiful as the pot itself. 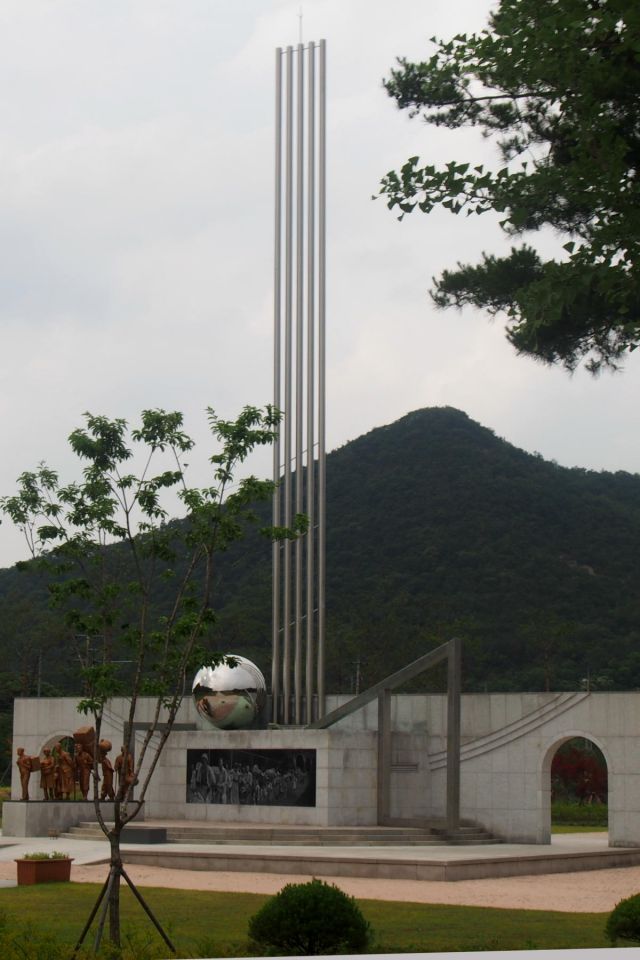 ...But um, yeah, I didn't come to Yeongdong to look at pots at the railway station. Korean Memorial Day was on June 6th, and I wanted to commemorate the occassion by visiting the No Gun Ri Memorial Park (노근리평화공원). So I was doing Memorial Day incorrectly- this holiday is for people who died while in military service. The Koreans who died at No Gun Ri were civilians. They were killed by soldiers, though. American ones. 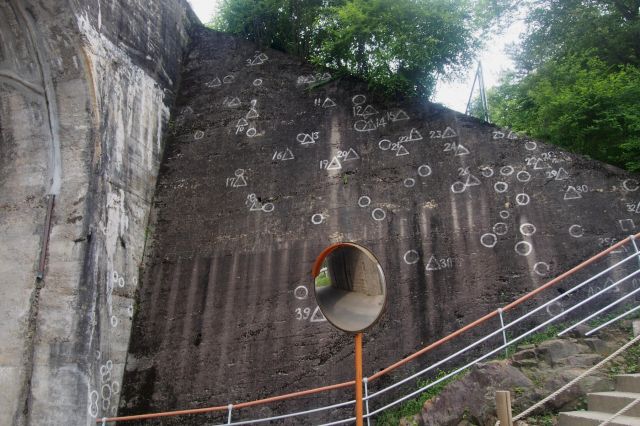 This is one of the walls of the railroad bridge. It's covered with bullet holes that have since been circled with white so that they may be more clearly visible. I don't really know how to react to situations like this except for, you know, shame. The park museum does its best to try and put American actions here in context but even that's nowhere near enough. "Red Tomb" made it pretty clear that No Gun Ri was not an isolated incident, much as we would like to think otherwise. 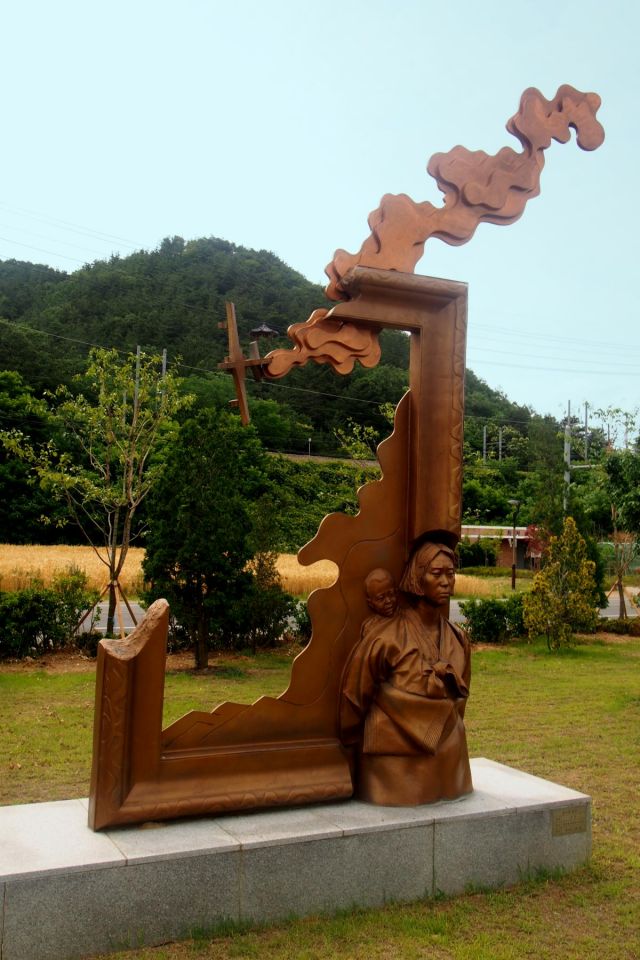 In general the park has a fairly humanitarian bent about it. There are sculptures all over the area that run along the same basic theme- the general tragedy of war. While the sculptures are pretty, it's rather gloomy thinking about the deeper reasons why they exist. 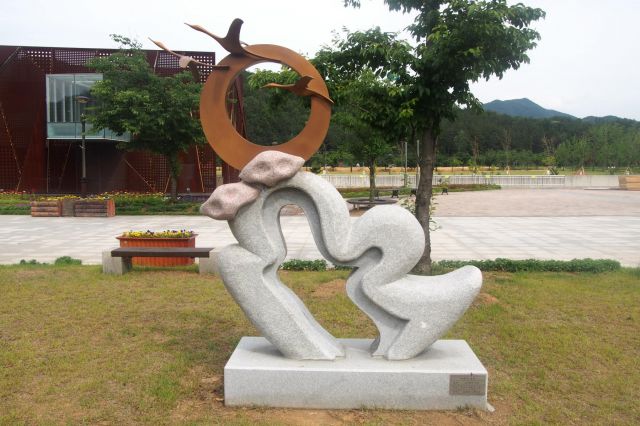 By and large abstraction is the main obvious style, though, so proper interpretation tends to elude me. I didn't even notice that this one had birds until someone pointed it out to me. Agh, I should have crouched, then they'd be flying in the sky. 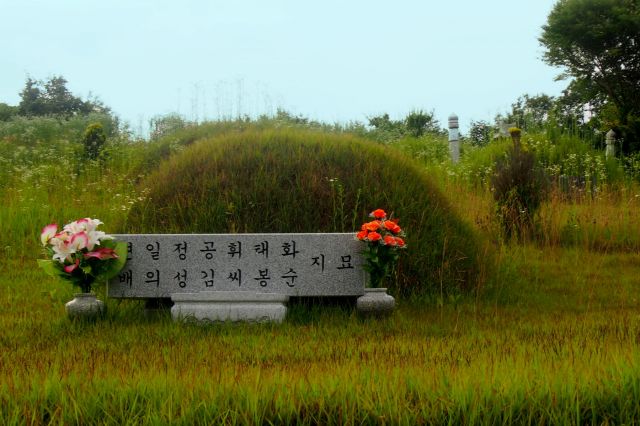 Though I found this grave near the park, it doesn't actually have any relation to the No Gun Ri massacre. It's just another random mound grave- they really do show up just about everywhere. The inscription is difficult to read, even in Korean, because there aren't any spaces. It's just the hometown and names of those interred- information that is most likely meaningless to anyone aside from whoever keeps bringing flowers. 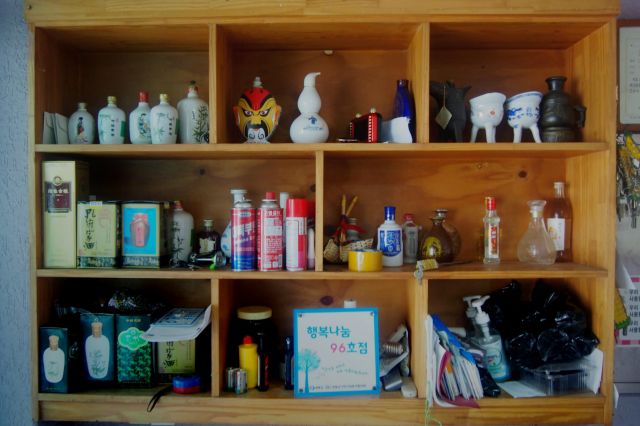 Also from the random picture file is a cabinet I saw in a restaurant containing various toiletries, pots, and sprays. Mostly I was just fascinated by how it manages to look very neat yet horribly untidy at the same time. 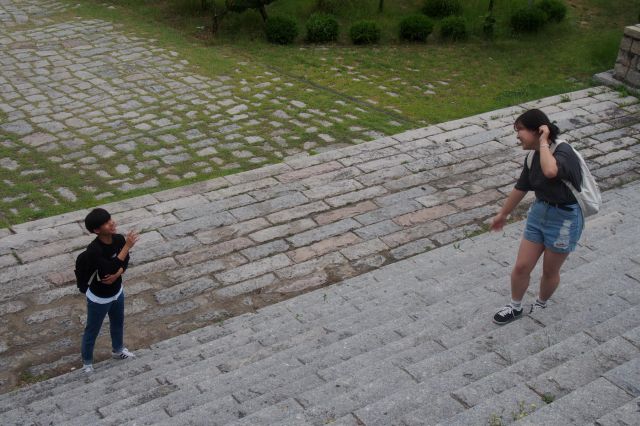 I'll close out the Yeongdong travelogue with this story of an event I saw at Yeongdong University (영동대학교). This couple is playing rock-paper-scissors with each other. The winner goes up exactly one stair, then they play again. While I first heard of this game from the short movie "One Perfect Day", it was only through repeated exposure that I was able to confirm that it is in fact a real thing couples do.

But be warned- this game is only ever normally played when there aren't any people around or there will be incessant gawking. You never know when some weirdo tourist with a camera might take your picture and post it on the Internet.