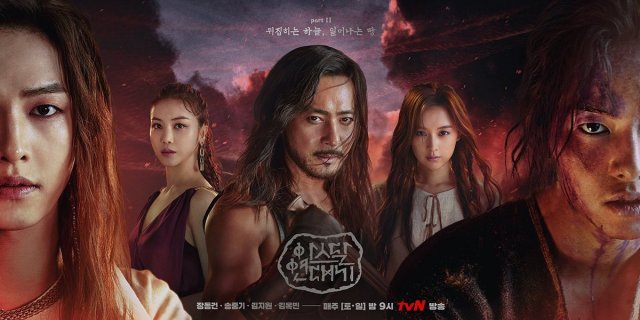 "Arthdal Chronicles" has topped the Good Data report for five straight weeks. The latest report, which covers the fourth week of June, is also the first one to feature data following Song Joong-ki and Song Hye-kyo's divorce announcement. However, "Arthdal Chronicles" has actually lost some ground on raw metrics, and Song Joong-ki's position as a performer is unchanged at number three.

"One Spring Night" continues its fourth straight week at number two. It too has lost points on objective metrics, suggesting that interest in the currently best performing dramas may be starting to wane. Lead actors Han Ji-min and Jung Hae-in hold the first and second spots respectively as actors with leading roles.

"Voice 3" actually increased its share based on objective metrics considerably, most likely in response to this being the drama's final week. However, much of the responses recorded skewed negative, matching previous trends where "Voice 3" has mainly been discussed in critical terms.

"Search: WWW" hit fourth place in its best performance yet at the drama's halfway point. Lim Soo-jung is still in fourth place for performers, while Lee Da-hee has cracked the tenth place spot (up from seventeen) due to continued positive reception to her 'girl crush' styled character in the drama.