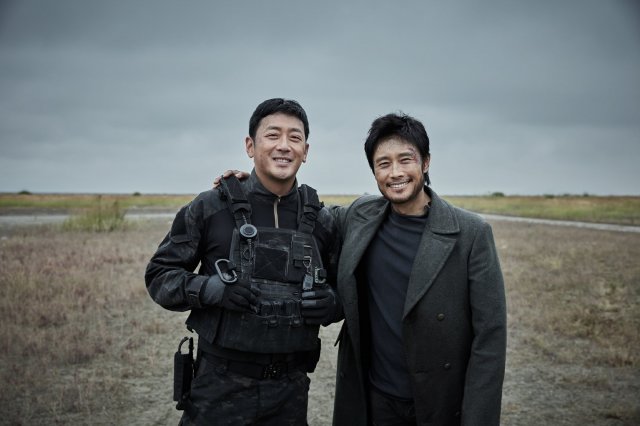 As of July 21st, the upcoming major film "Ashfall" has finished shooting. "Ashfall" stars Ha Jung-woo, Suzy, Lee Byung-hun, and Ma Dong-seok in a massive effort to try and prevent the titular mountain from erupting.

"Ashfall" represents a major moment for all four of these major actors. It's Ha Jung-woo's first major motion picture following his recent prominence in the production side of South Korean film. It's the first film for Suzy since she changed to an agency more in line with her acting career ambitions. It's Lee Byung-hun's first film since appearing in the drama "Mr. Sunshine", and it's Ma Dong-seok's first ensemble piece having appeared in a long string of movies as the major star.

"Ashfall" had been filming for five months and the actors were relieved that their part in the movie's production was finally over. Lee Byung-hun has noted that for all the power of the cast, he thought the process and the results of filming were what was important. He was hopeful that the film's diverse stories would be well communicated.

Ha Jung-woo also said that there were many dangerous scenes in the movie. He expressed thankfulness that the shooting resolved safely, and promised to do his best as necessary for the next stage of the film's production. It is unknown how long the editing process will take, but "Ashfall" is currently expected to field a theatrical release sometime in winter.