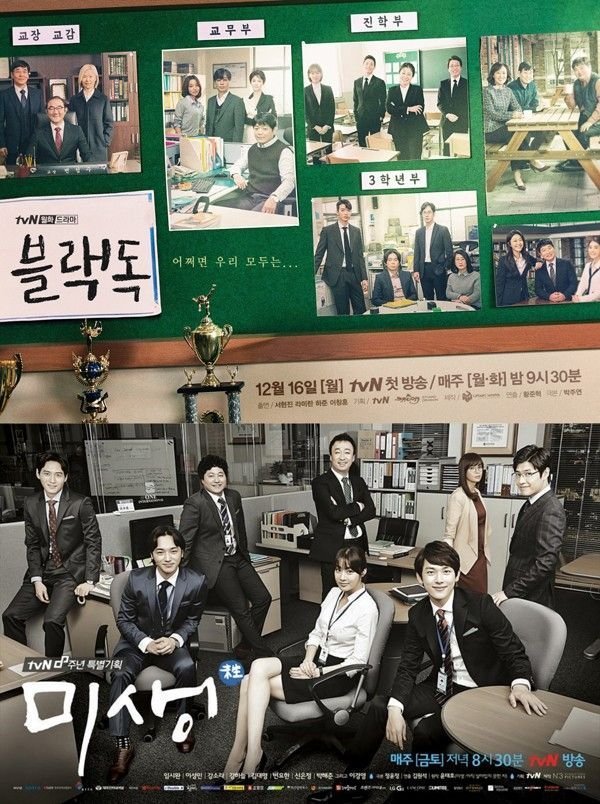 The latest drama from tvN, "Black Dog", has been a bit of a sleeper in the current ratings environment. But especially compared with tvN's overall lackluster year, the low profile drama about a teacher's life in the backrooms with a more functional focus on students has been gaining a following. The latest episode hit ratings of 4.3%, which is more than "Incomplete Life" had in its fourth episode.

Stylistic similarities make the two dramas easy to compare to one another. The main character in "Black Dog", much like the lead in "Incomplete Life", comes into her new job with certain sets of expectations, and the drama deals with the culture shock of these expectations while she adapts to them. Fans have described "Black Dog" as being "Incomplete Life" - teacher's edition.

Noteworthy differences between the dramas that have stoked the fans' interest mainly depend on the setting. While the office workers in "Incomplete Life" struggled to complete projects that would prove profitable for their corporation, the teachers in "Black Dog" have less concrete goals. Consequently, while effectively teaching students is a critical goal, in practice the advice given to less experienced teachers mainly centers around how to maintain respect.

The importance of social elements is also highlighted by the cast, which is mixed older and younger actors. Such age mixing in a professional context is unusual in dramas, even in "Incomplete Life". The recently concluded "VIP" similarly had most of its cast be in the same general age range. As a result, "Black Dog" has a very functional outlook on what it means to have an older work colleague, showing that respect as being thanks to learned experience, rather than just being obligatory.