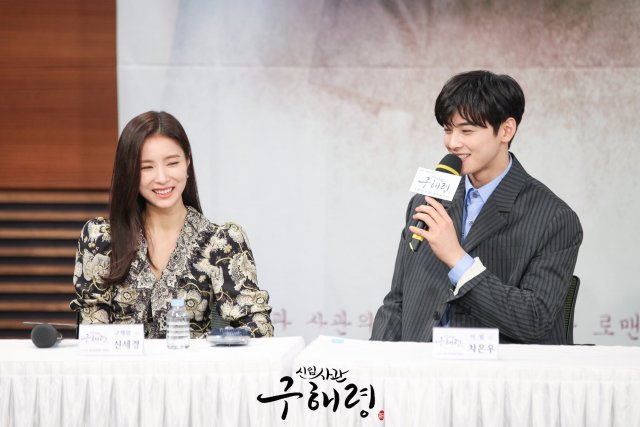 Ahead of "Rookie Historian Goo Hae-ryung"'s premiere the cast and crew have discussed what they were trying to do with the drama. Director Kang Il-soo has described the story as one of personal growth for women in the nineteenth century who worked in the palaces. He described having heard about women who pretended to be illiterate so as to avoid written advances, and thought this was a good foundation for a fun story.

Kang Il-soo goes on to emphasize how women are often rendered invisible by historical stories, and said that "Rookie Historian Goo Hae-ryung" was a deliberate attempt to paint life back then from a female point of view. Lead actress Shin Se-kyung has been critical to getting that point across. Shin Se-kyung has echoed Kang Il-soo's statements about the need to make the Joseon era feel more relevant to people like her.

Cha Eun-woo has also said that he feels great working in the drama, though his parents have told him not to be too proud. He said that he recognizes how different drama genres are a matter of personal taste. He has still hewed to the line about the story being one of personal growth, even while acknowledging that "Rookie Historian Goo Hae-ryung" also deals with many external insitigators of conflict.

Shin Se-kyung has spoken highly of Cha Eun-woo as a co-star, describing him not just as a pretty face, but as a close friend with whom she has become comfortable filming. Cha Eun-woo agreed with the sentiment, and also praised Shin Se-kyung's acumen in the drama's leading role.

Park Ki-woong, as the drama's chief villain, has described his role more in terms of personal growth than character growth. He has said that he has always wanted to do a historical drama and that he feels like this has been a great chance for him in the role of crown prince. "Rookie Historian Goo Hae-ryung" airs on Wednesdays and Thursdays at nine 'o clock in the evening.