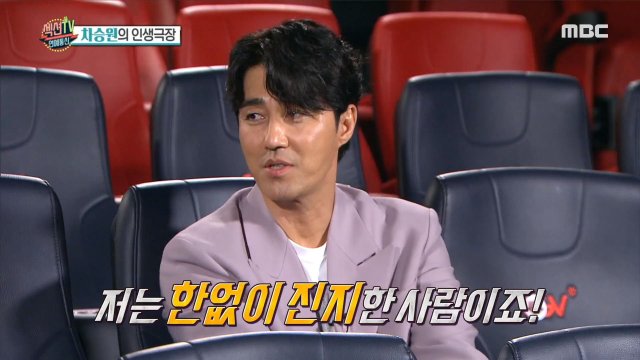 On August 15th Cha Seung-won was interviewed on the MBC entertainment program 'Section TV' about his upcoming film "Cheer Up, Mr. Lee". The actor confessed to having felt a bit strange having appeared in a comedy for the first time in twelve years. Cha Seung-won's last comedic project was "Small Town Rivals" back in 2007.

As Cha Seung-won explained, the irony was that at that point in his career he wanted to branch out and do a wider variety of genres. For quite some time Cha Seung-won was only known for doing comedies. As a result, doing more comedies became unthinkable until it had been so long that Cha Seung-won started to miss the experience.

Cha Seung-won also expressed surprise at the positive response to the movie's trailer which was recently released. The movie finished filming last September and only just recently gained a release of September 11th. It will compete with "The Bad Guys: Reign of Chaos" and "Tazza: One Eyed Jacks" for the highly lucrative extended Korean Thanksgiving weekend at the box office.

"[HanCinema's News] Cha Seung-won Talks About Returning to Comedy With "Cheer Up, Mr. Lee""
by HanCinema is licensed under a Creative Commons Attribution-Share Alike 3.0 Unported License.