[HanCinema's News] Characters in "Mother of Mine" 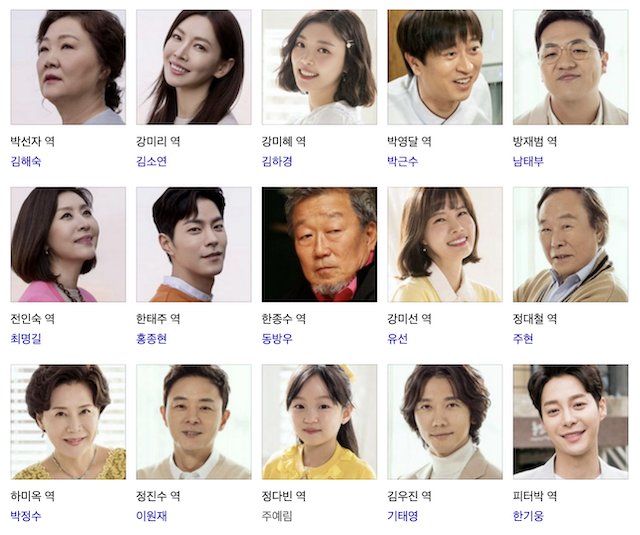 With its latest ratings breakthrough of 32.6% "Mother of Mine" is attracting a lot of attention. So for viewers not caught up with the drama, a basic rundown of its characters and story may be in order.

The title character, Seon-ja, who is played by Kim Hae-sook, is a woman in her early sixties. She runs a beef bone stew restaurant, and had to struggle to raise her three daughters alone.

Seon-ja's eldest daughter Mi-seon (played by Yoo Sun) is a working mother. She's married to Jin-soo (played by Lee Won-jae-IV) and they have a younger named daughter Da-bin (played by Joo Ye-rim).

Mi-ri (played by Kim So-yeon) is the second daughter. She's a high-powered career woman who is primarily motivated by success on her strength, having seen her mother struggle to take of her children. Tae-joo (played by Hong Jong-hyun) is a new employee at her company with whom she keeps getting intertwined.

Mi-hye (played by Kim Ha-kyung) is the last daughter. In her early twenties she received recognition for her performing talent, but has been stuck in a rut career wise ever since then. Woo-jin (played by Ki Tae-young) is the CEO of a publishing company with whom she keeps getting intertwined. Jae-beom (played by Nam Tae-boo) is her ex-boyfriend.

"[HanCinema's News] Characters in "Mother of Mine""
by HanCinema is licensed under a Creative Commons Attribution-Share Alike 3.0 Unported License.