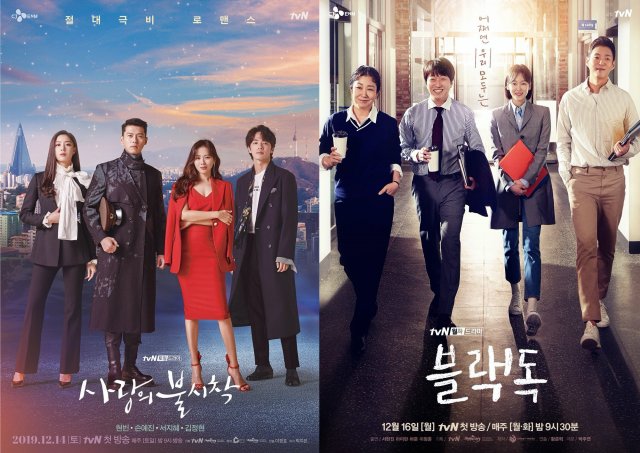 Though a major trendsetter in previous years, tvN has struggled to create much buzz with its projects this year. Though the cable company has been broadcasting a wide number of genres, most of them have met with relatively little interest from audiences, the main standout success being "Hotel Del Luna".

There have been some moderate successes at the network, like "Designated Survivor: 60 Days" and "The Crowned Clown". But even "Arthdal Chronicles", the network's main flagship project, posted below projections. Other dramas which seemed to have strong concepts and stars, from "Abyss" to "Melting Me Softly" to "Her Private Life" to "When the Devil Calls Your Name", struggled to find an audience.

It's in this context that tvN's final dramas of the year, "Crash Landing on You" and "Black Dog", are coming under scrutiny. While "Crash Landing on You" has the powerful pairing of Son Ye-jin and Hyun Bin, similar star power did not do much for "Her Private Life". "Black Dog", with its offbeat concept of a realistic look at the lives of teachers, has the benefit of low expectations, its failure too could prove fatal to tvN's current diverse strategy.

However, persons related to tvN have stated that the company is less concerned about ratings as it is about secondary distribution. Supposedly, their strategy has been more effective in that regard, and granted the network valuable data when it comes to analyzing current popular trends. "Crash Landing on You" and "Black Dog" could prove to be proof of concept in that regard. So far reactions to the marketing of these dramas have been positive.

"[HanCinema's News] "Crash Landing on You" and "Black Dog" Last Hopes for Disappointing Year at TvN"
by HanCinema is licensed under a Creative Commons Attribution-Share Alike 3.0 Unported License.