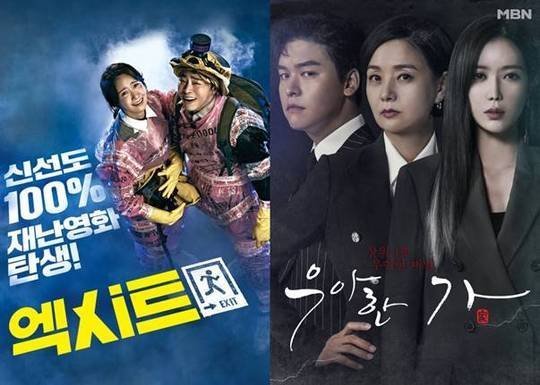 The latest Video On Demand performance charts have been released for the second week of September, on September 20th. The highest requested movie during this time period was "Exit - Movie", while the most requested drama was "Graceful Family".

The comic disaster flick "Exit - Movie" was the highest performing box office draw over the summer. In second place was the colonial era war movie "The Battle: Roar to Victory", which was also in second place in theaters this summer. The Palme d'Or winning "Parasite" was in third place, while the supernatural action movie "The Divine Fury" was in fourth place, followed by foreign movies.

The risk management based corporate drama "Graceful Family" is a bit of a surprise for the top rank in dramas, as the drama from a minor cable network has had relatively little publicity. It was followed up by "Arthdal Chronicles" in second place. The ancient historical drama's popularity can be traced to viewers watching episodes from part one and two to better understand the currently airing part three. "Hotel Del Luna" and "Strangers from Hell" round out the top four there.