[HanCinema's News] "Exit - Movie" up Against "The Battle: Roar to Victory" Next Weekend 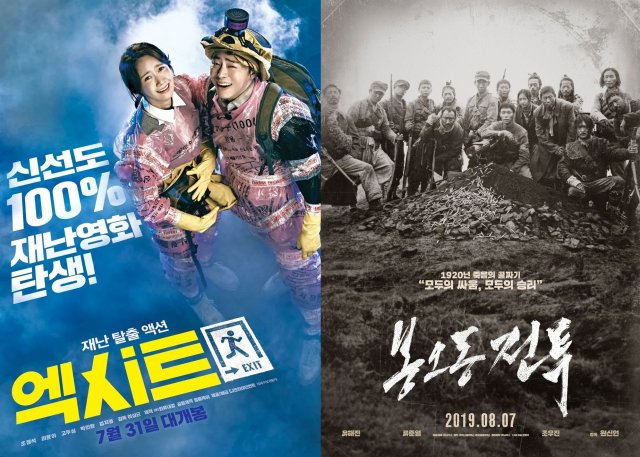 Preliminary figures for "The Battle: Road to Victory" are very strong. It's already outpacing "The Divine Fury" in terms of reservations. However, an unknown quantity in the upcoming box office fight is "Bring the Soul: The Movie". While concert films are not generally considered major releases, previous BTS films have outperformed expectations and the newest movie starring the hit band is doing even better in online reservations than "The Battle: Road to Victory".

This performance could just be a result of BTS fans already knowing they want to see the movie, while "The Battle: Road to Victory" remains an unknown quantity. "The Battle: Road to Victory" has a strong contextual advantage, as the film, which depicts Koreans fighting against the Japanese army during the Occupation period, is a strong fit for the current political environment, where an anti-Japan boycott holds strong support in response to Japan's starting a trade war with South Korea.

But "Exit - Movie" is not to be underestimated, having cleared the three million mark in its first weekend and enjoying strong recommendations from those who have seen the movie. "Exit - Movie" is well positioned to take a shot at being the year's fifth ten million viewer movie, as serious foreign competition won't arrive until next weekend.

"[HanCinema's News] "Exit - Movie" up Against "The Battle: Roar to Victory" Next Weekend"
by HanCinema is licensed under a Creative Commons Attribution-Share Alike 3.0 Unported License.