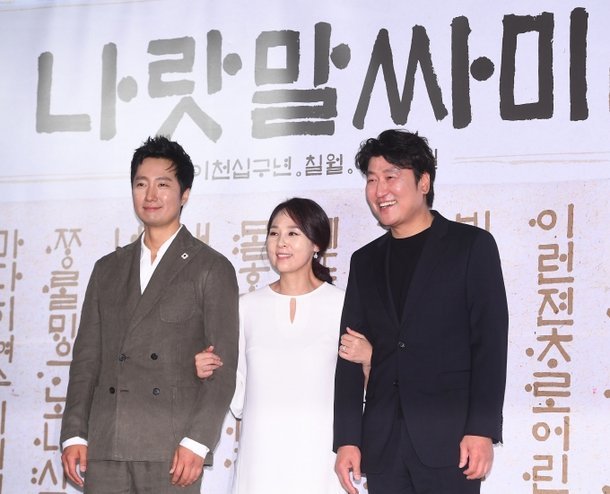 While Song Kang-ho has already had a big hit this year in the form of "Parasite", his real major movie this year is "The King's Letters". Song Kang-ho will play the role of King Sejong, and depict the unseen agony and loneliness he went through for the sake of producing the Korean alphabet.

Song Kang-ho has described the opportunity to play King Sejong as being an honor. Song Kang-ho stated that there's quite a bit of pressure related to his taking on a role of such historical importance. Still, he felt it was important to take the opportunity now.

"The King's Letters" will also be Song Kang-ho's first reappearance with his "Memories of Murder" co-star Park Hae-il. While Song Kang-ho played the lead role in that film, Park Hae-il's part was minor by comparison. Still, for both of them to be on screen together again is a reminder of just how far their careers have progressed since then.

Song Kang-ho has joked how between the two of them, he's the only one that looks old now. Song Kang-ho has described seeing Park Hae-il and Jeon Mi-sun, who also appeared in "Memories of Murder", as being something like a family reunion experience. Park Hae-il has echoed this sentiment in his own comments.

The casting element has raised the profiles and ambitions of "The King's Letters" as a project, as the movie appears to be trying to revive the synergy and transformative nature of the older film, albeit with a completely different genre. "The King's Letters" will open at the domestic South Korean box office on July 24th some sixteen years after "Memories of Murder" did.

"[HanCinema's News] Following Success of "Parasite" Expectations Are High for Song Kang-ho and "The King's Letters""
by HanCinema is licensed under a Creative Commons Attribution-Share Alike 3.0 Unported License.