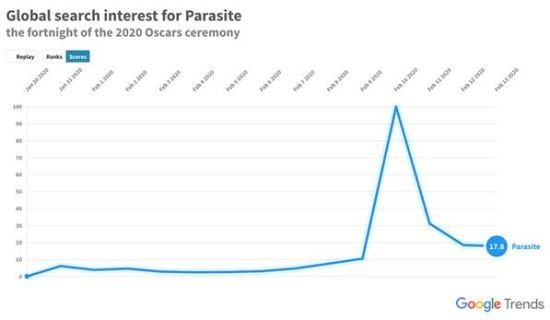 Most movies that receive the Academy Award for Best Picture receive a boosted interest after the awards ceremony.

But "Parasite" has had a particularly strong effect in this regard internationally, as it has come to dominate Google Trends in regards to film searches, boasting a 857% increase on the day of its victory and a still noticeable uptick several days afterwards.

Other terms relevant to "Parasite" have experienced similar traffic boosts over the same time period. Director Bong Joon-ho, for example, had a 2038% improvement, and searches for recipes regarding the kind of hot noodles consumed by characters within "Parasite" jumped by 400%. Searches for Asian supermarkets in general had a 350% uptick.