[HanCinema's News] Ha Ji-won Interviews her Own Character From "Chocolate" 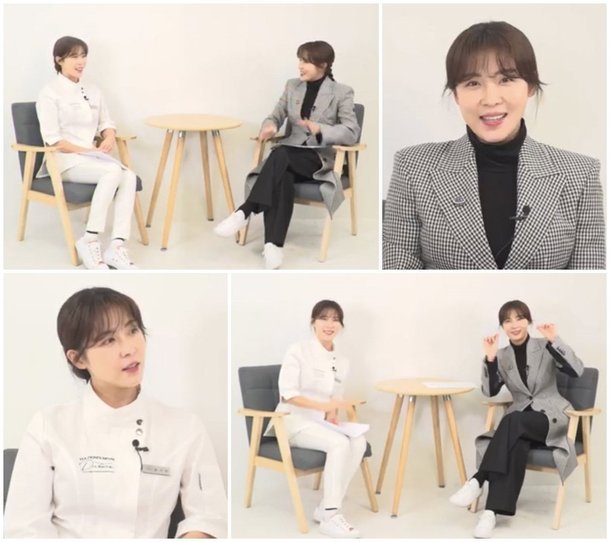 Haewadal Entertainment has released an interview of Ha Ji-won through its YouTube channel. This interview has a distinctively unusual format. In it, Ha Ji-won appears both as herself, the actress, but also as her character from "Chocolate", Moon Cha-yeong. The video was made in anticipation of the completion of "Chocolate", and in the video Ha Ji-won expresses disappointment that the drama has come to an end. The interview questions come from fans.

One question dealt with the extended dramatic delay before Moon Cha-yeong is able to respond to the confession of Lee Kang, who is played in the drama by Yoon Kye-sang. Ha Ji-won said that even her mother said the same thing as they watched the drama together. Ha Ji-won claimed that even during filming she was so tense about what the reaction would be that she couldn't sleep that night. Creative dramatic reasons were thus used to explain the delay.

To Moon Cha-yeong a question was addressed about what food she would like to prepare for fans. Moon Cha-yeong replied that she would want to make kimchi fried rice. She described the dish as having sentimental value, as it was the first one her boyfriend gave her. Ha Ji-won mentioned that she was also diligent about giving thanks to the chef employed by "Chocolate" who taught her how to make the drama's many dishes that were so critical to understanding her character's mindset.

Ha Ji-won also mentioned how "Chocolate" had heightened her curiousity about food in general, and how she had recently concluded a food tour of Yeosu. Haewadal Entertainment also stated that they hoped fans appreciated the unusual format provided for Ha Ji-won to give her closing statements about the drama. Haewadal Entertainment promised to keep their wishes in mind for future communications between stars and fans.

"[HanCinema's News] Ha Ji-won Interviews her Own Character From "Chocolate""
by HanCinema is licensed under a Creative Commons Attribution-Share Alike 3.0 Unported License.