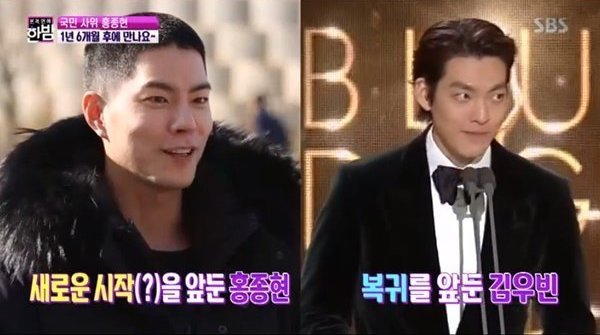 On the latest episode of the entertainment news show 'E-news Exclusive', footage from actor Hong Jong-hyun's entrance into mandatory military service from earlier this month was broadcast.

The actor discussed his nervousness about entering into mandatory military service at such a late age, close to the maximum, and knowing about the holidays that we would need to spend with his unit.

Because of Kim Woo-bin's diagnosis of nasopharyngeal carcinoma, he is exempt from mandatory military service requirements. He may have felt guilt about this, considering that Hong Jong-hyun expressed similar guilt for beginning his service so late compared to his friends. The two actors met early on in their careers in the 2011 dramas "Drama Special - White Christmas" and "Vampire Idol".