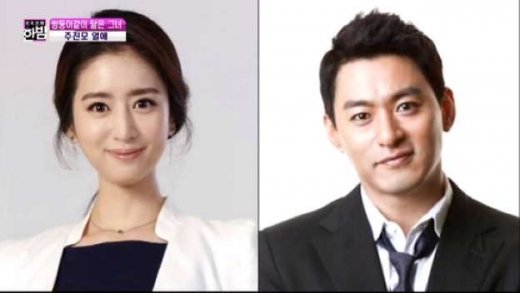 Following news of Joo Jin-mo's imminent marriage, many have wondered how Joo Jin-mo met his bride to be. Min Hye-yeon is a family doctor who has made many appearances in a professional capacity on television variety shows, where she has sat on panels.

As it happens they did not meet directly, but rather because of the intervention of Kim Hyun-ok. Min Hye-yeon had appeared on her good morning show on Channel A, and for Joo Jin-mo's sake, Kim Hyun-ok set up a meeting between the two.

Kim Hyun-ok has said that having seen Min Hye-yeon for week after week on his show he felt that her personality was a good fit for Joo Jin-mo. Though both were embarrassed by Kim Hyun-ok's troublesome meddling, evidently he had good instincts on the subject.

Apparently one reason they were an easy match for each other is that both enjoy the hobby of fishing. Joo Jin-mo has also publically thanked Kim Hyun-ok, saying that thanks to his friend, he was able to have a happy new year.