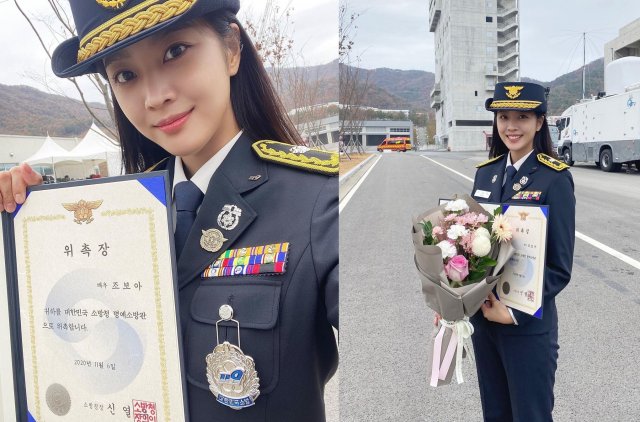 On November 6th Sidus HQ released a picture of actress Jo Bo-ah holding a certificate stating that she is an honorary firefighter. Jo Bo-ah was given the certificate on November 6th as part of an event for Fire Prevention Week, which is leading up to Fire Prevention Day on November 9th. Fire prevention has been a big issue in South Korea due to major fires in recent years. Lee Joon-hyuk was also present for the event, as was South Korean president Moon Jae-in.

Jo Bo-ah was most likely invited to attend the event due to her appearance in the drama "Forest" earlier this year. Though Jo Bo-ah did not play a firefighter, her co-star Park Hae-jin did. Lee Joon-hyuk will also appear as a firefighter in the major film " Firefighters" which is expected to be released next year. Jo Bo-ah is currently appearing in the drama "Tale of the Nine Tailed" on tvN.