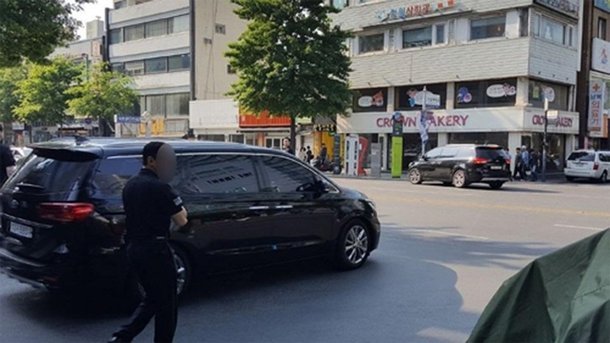 En route to an early stage greeting event in Daegu, a car carrying "Juror 8" cast members was photographed taking an illegal U-turn. As the pictures started to spread through social media, "Juror 8" had to issue an apology for the car's actions.

The car was easily identifiable in part because it was surrounded by a guarded escort. In its official statement "Juror 8" said that the failure to observe the posted rules of the intersection was a result of the car moving too quickly. They apologized for any inconvenience to the people of Daegu and promised to be more careful in the future.

Another car was also seen doing an illegal U-turn in the pictures, suggesting that this may be a common occurence at this particular intersection and only noteworthy in this case because of who the car was carrying. Daegu police have said they are currently investigating the other car, which had a visible plate number in the photos.

"Juror 8" opens in South Korean theaters on May 15th. It stars Moon So-ri and Park Hyung-sik, and was directed by Hong Seung-wan. There has been no confirmation or denial as to whether they were in the car.