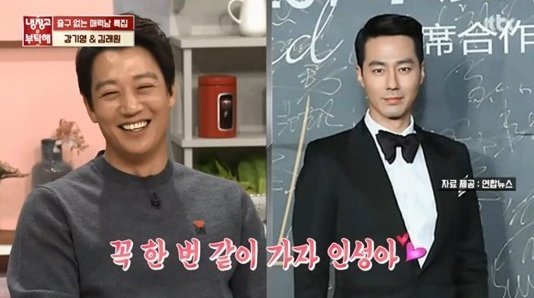 On the latest episode of 'Please Take Care of My Refrigerator' Kang Ki-young made some surprising comments about his "Crazy Romance" co-star Kim Rae-won, saying that Kim Rae-won could have a girlfriend if he didn't go fishing so often. When Kim Sung-joo asked Kim Rae-won who he went fishing with, Kim Rae-won replied that he had gone on trips with the actor Choi Jae-hwan as well as other celebrities.

Kang Ki-young and Kim Rae-won are currently doing publicity for the upcoming movie "Crazy Romance", which releases on October 2nd. 'Please Take Care of My Refrigerator' is a cooking show centered around making dishes from the refrigerators of the guest stars. This is why the subject of fishing came up, as Kim Rae-won has a lot of fish in his refrigerator.