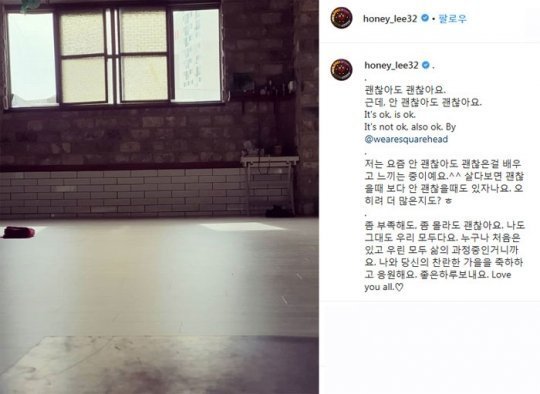 On October 23rd Lee Hanee made a peculiar Instagram post. In it, a picture of an empty room is shown. Lee Hanee writes, "It's ok, is ok. It's not ok, also ok" in Korean, and then again in English.

Fans reading the post could recognize the deep sentiment attached to it, but the content is so vague it is unclear what Lee Hanee might be alluding to. However, the post seems like it may be a follow-up to a September Instagram post discussing the differences between Lee Hanee and someone she had known for five years. Lee Hanee's agency claimed that this was a reference to Lee Hanee's pet dog and not a veiled allusion to a secret break-up between her and Yoon Kye-sang.