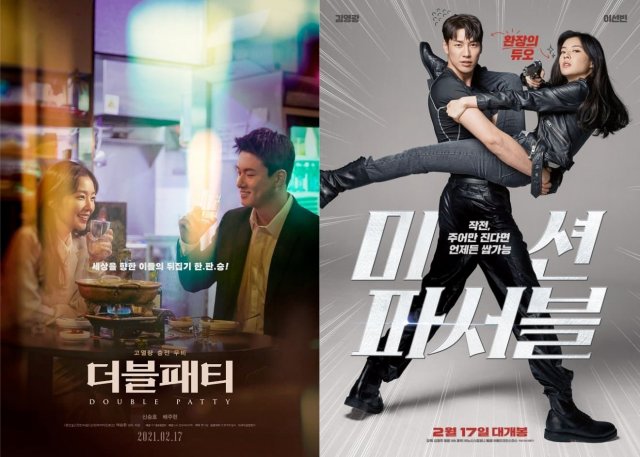 Foreign films have led at the COVID-19 enfeebled South Korean every day so far in 2021. But this weekend sees two films try to dislodge them from this position, and very different ones at that. "Mission: Possible" looks to have the best chance, with stronger ticket reservation numbers. "Double Patty" had better numbers pre-reservation, although it has long since lost much of its momentum.

"Mission: Possible" is an action comedy starring Kim Young-kwang and Lee Sun-bin. Promotional material for the movie has focused on the bickering interplay between the leads, and their at-times dubious competence in their secret agent duties. "Double Patty" is a more introspective work, with the relative fame of the actors reversed by gender. Here Irene of Red Velvet plays the female lead, while Shin Seung-ho is her lesser known opposite.

If either film is able to achieve a lead over Soul it will not be by a wide margin. The Disney film has proved surprisingly resilient in the COVID-19 marketplace with 1.6 million admissions, over four times that of Onward, the previous project from the American film studio's animation division. "Mission: Possible" and "Double Patty" will be aimed at very different audiences- though that wasn't much help for "New Year Blues" which has struggled to so much as break a tenth of Soul's admissions.