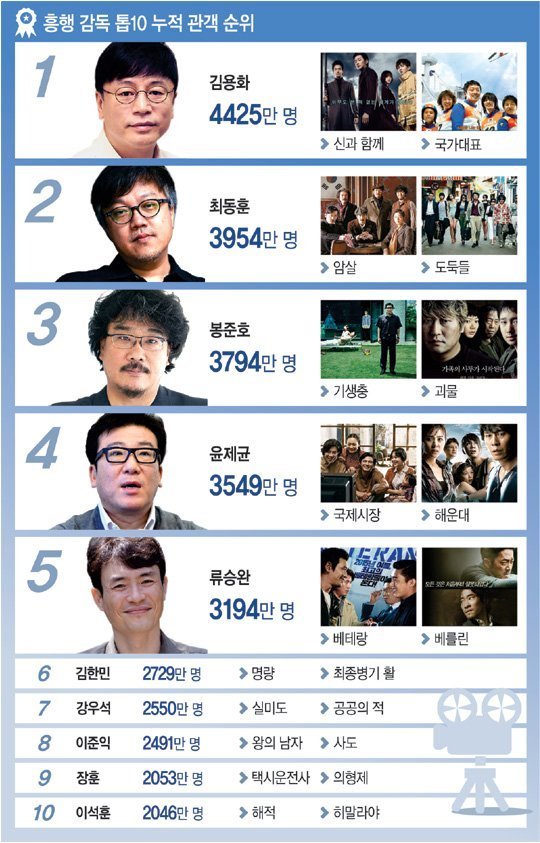 With the surprise success of "Parasite" Bong Joon-ho has jumped to third place in the all-time list for most admissions by a South Korean director at the South Korean box office. Though Bong Joon-ho's reputation is mainly as an artistic director, his films have enjoyed widespread appeal thanks to blockbusters like "The Host" and "Snowpiercer".

Director Choi Dong-hoon of "The Thieves" and "Assassination" is next in line at number two. He also made "Tazza: The High Rollers" and "JEON WOO CHI : The Taoist Wizard". Unfortunately, he has not had much luck getting his next film off the ground. "Wiretap" had to be suspended when star Kim Woo-bin became ill with nasopharyngeal carcinoma, and "Alien" is still in search of a cast. The scenario is not science fiction, the brief title more accurately translates as Outsider.

JK Youn at number four was responsible for the major movies "Haeundae" and "Ode to My Father", in addition to smaller popular films from earlier in his career like "Sex Is Zero". Lately he's been working more in producing than as a director. His currently listed future projects, "Hero" and "Return - 2019", are nowhere near finished with the necessary preproduction work.

Ryoo Seung-wan at number five is also focusing on the production end at the moment, having built up his viewer number on major action movies like "Veteran" and "The Berlin File", and having worked with smaller scale popular action movies earlier in his career. His next movie, "Escape from Mogadishu", is currently still in the planning stages.