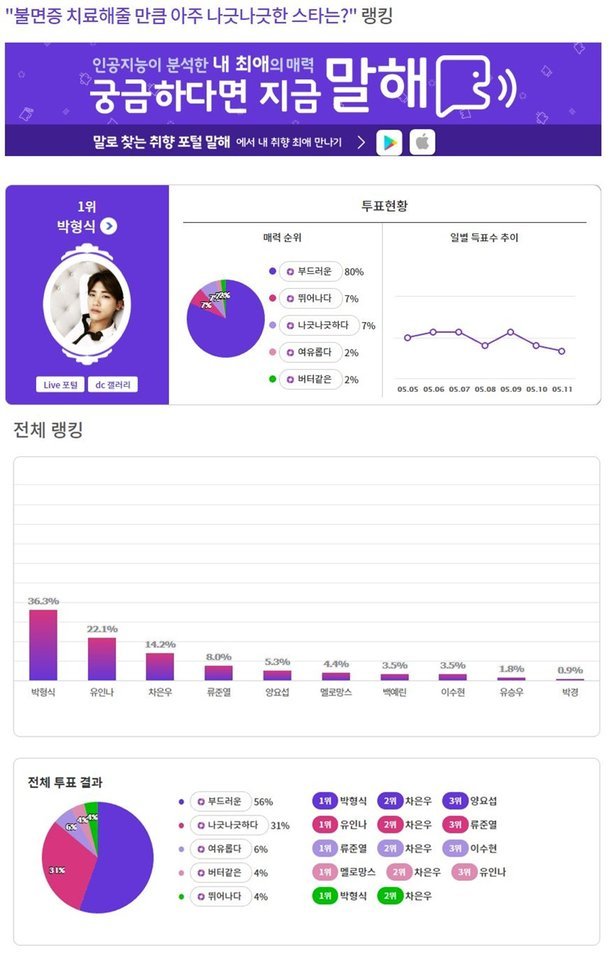 With 36.3% of the total vote Park Hyung-sik has topped a DCInside poll about which celebrity is the best cure for insomnia. The odd phrasing is most likely meant to imply that the celebrity in question is good at putting an agitated person at ease. Yoo In-na was second place with 22.1% of the vote. Cha Eun-woo was number three with 14.2% of the vote. The rest of the list all polled under ten percent.

Park Hyung-sik has been benefiting from a strong career boost as of late. Originally a singer in the group Children of Empire, Park Hyung-sik has been gradually making a name for himself with acting roles over the years. He's progressed from minor roles in dramas like "Dummy Mommy" and "The Heirs" to leading ones in "Suits" and "Strong Woman Do Bong-soon". He will also appear in a leading role in "Juror 8", which releases in theaters on May 15th.

Yoo In-na recently finished "Touch Your Heart" and has been confirmed to appear in "Hitting on the Blind Boss" a drama about which there is as yet little detail. Cha Eun-woo will appear in a leading role on "Rookie Historian Goo Hae-ryung" in July.