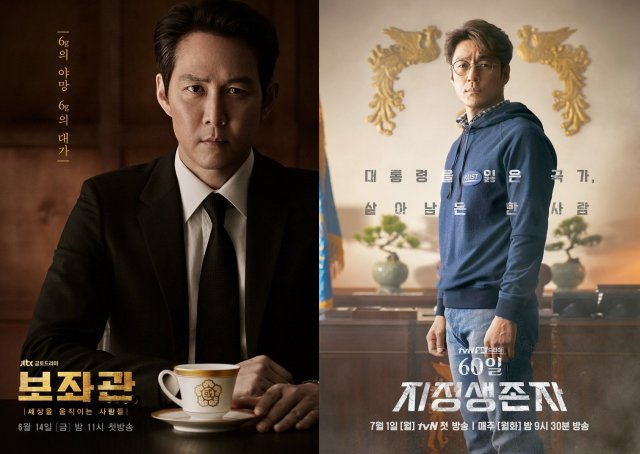 With the airing of "Chief of Staff" and "Designated Survivor: 60 Days" the profile of political dramas in the South Korean market is rising. While both dramas are currently hovering in the 4% range for overall ratings, only average in the current market, such genre fiction was almost never seen locally up until now.

Much of this has to do with international trends. "Designated Survivor: 60 Days" attracted attention for a possible South Korean remake when the original American version did surprisingly well on South Korea's domestic Netflix platform. "Designated Survivor: 60 Days" is itself a relative latecomer to the American trend of intense political dramas.

But the local market has also been primed somewhat for this trend. In terms of dramas "My Fellow Citizens", a more comedic drama that used politics mainly as a backdrop, finished its run earlier this year at eight percent. Though not a major hit, "My Fellow Citizens" showed there was interest in the setting.

South Korea's changing domestic politics are also a likely factor. In contrast to the deeply cynical political film "The Mayor", which was produced under the previous conservative government, current and upcoming South Korean dramas have been framing politics as a factional war between generally competent idealogues. "The Mayor", by contrast, featured characters on a spectrum from corrupt to incompetent. Local attitudes toward politics have featured a similar shift over the last few years.

The trend towards political dramas shows no signs of ending. "Chief of Staff" has already been confirmed for a second season, which was preproduced alongside the first. Additionally, "The Great Show" is expected to start airing on tvN some time this year. Where "Chief of Staff" has been about political organization and "Designated Survivor: 60 Days" about political crisis, "The Great Show" is expected to deal with political theatricality.