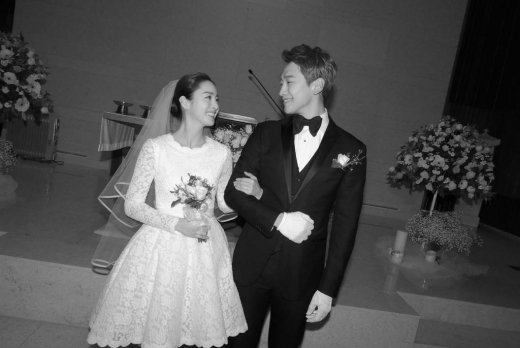 On Saturday night, February 16th, Rain made an appearance on the popular JTBC variety show Knowing Bros to promote his new film "Race to Freedom: Um Bok Dong" which will be released on February 27th. The film is about a legendary bicycle athelete from the Occupation era. Rain also discussed his relationship with his wife, Kim Tae-hee.

Knowing Bros personality Kang Ho-dong mentioned that he remembered hearing about how Rain would just be a bachelor forever. Rain responded to the notion with humorous outrage, further noting how he phrased past comments poorly. Rain claims that while he spoke about being careful, he was worried about going too far with his love, not about getting hurt over it. The specific metaphor used was that of a returning arrow.

In addition to talking about married life and his new movie, Rain also discussed BTS' remake of his song "Come Back Home" and danced to it. After the appearance, Kim Tae-hee also uploaded a supportive photo on social media.