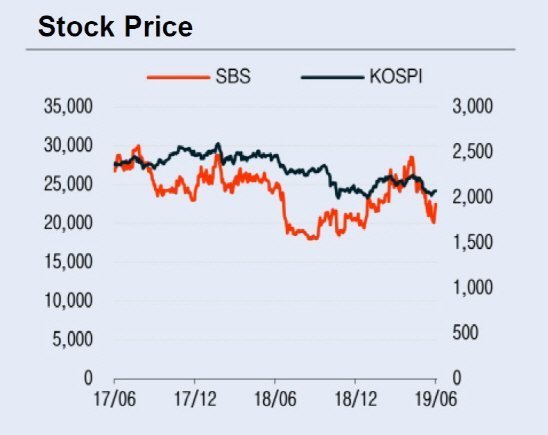 SBS stock has become a hot commodity for investors due to its frequently undulating performance. More than other networks SBS's financial performance is heavily tied to whatever dramas or variety shows it is airing right now. Though relatively weak at the moment, there is cause for optimism in SBS's upcoming schedule.

Some investors are anticipating that the new 'Secret Forest' variety show starring Lee Seung-gi and Lee Seo-jin in August will be very popular across all platforms. Their bromantic conversations on 'Master in the House' have already provoked much positive buzz about their new project. Variety shows are cheaper to produce than dramas, so this project in particular is very low risk.

"Doctor John" is also expected to improve the network's prospects in late July. However, "Secret Boutique" and "Vagabond" in September are the main causes of optimism for the network's financial prospects, particularly the latter. Because "Vagabond" has been licensed by Netflix, profits are guaranteed even if the project is unpopular. The other three are more variable influences, as their true viability is as of yet unknowable.