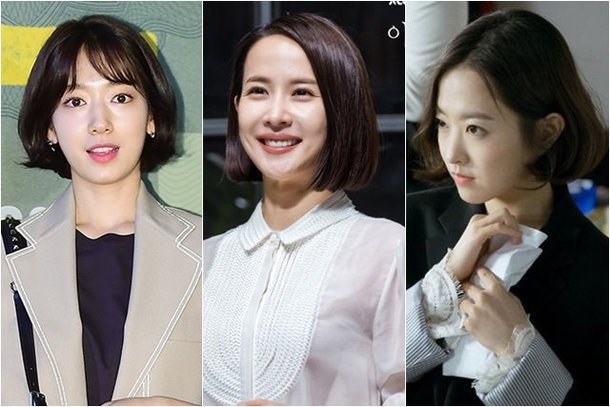 Park Shin-hye set off a big stir earlier when she changed her haircut and with it, her entire look. For "Abyss" Park Bo-young similarly tried to rework her image (to limited success) by using short hair to emphasize her character's more action-oriented lifestyle. Cho Yeo-jeong has shown diametrically different kinds of housewives with her own short haircut for the film "Parasite" and the drama "Beautiful World".

None of these three actresses have much in common with each other - and that's the point. Through very different kinds of media exposure, all three have contributed to the recent trend of shorter haircuts for younger women in South Korea. The haircut is functional in the summer heat, and easier to maintain for increasingly busy lives.

But for women growing older, there's a subtle benefit as the haircut allows for an image of soft warmth without necessarily being youthful. Park Shin-hye, Park Bo-young, and Cho Yeo-jeong all look like definite adults in this new look, and stand out better. Jo Yeo-Jung In particular has become closely associated with "Parasite", even though she has about the same amount of screentime as the other actors, just because of the distinction given to her style.

For the most part the bob cut is not a standard. In general, actresses tend to prefer longer hair. But it is hard to deny that the trend is gaining in prominence.