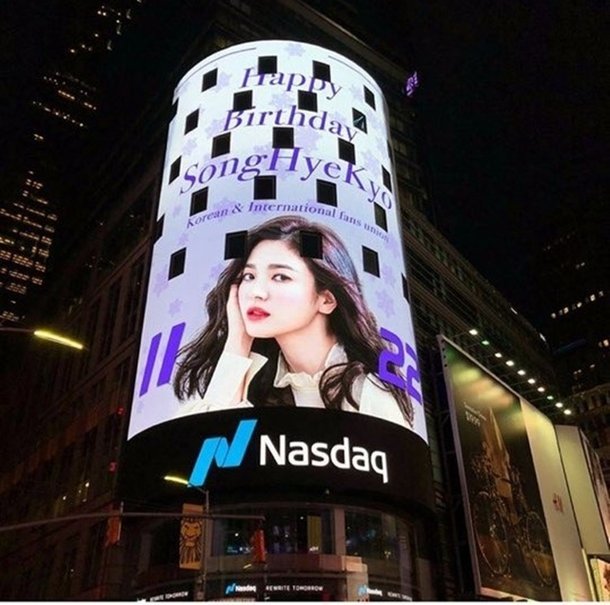 Song Hye-kyo has just become the first Korean actress to be featured in a Times Square advertisement. Curiously enough, she is not appearing as a model for a specific product. Rather, the advertisement is a birthday greeting from fans, much like the ones that are commonly seen around Seoul from international fans wishing to express support for their favorite stars.

The curious location of this particular advertisement is likely a consequence of stories from earlier this year that Song Hye-kyo was taking classes in New York City. It is unknown if Song Hye-kyo saw the ad herself or is even in the area anymore. However, fans are generally satisfied at just having a chance to support their most well-liked celebrities, and word of such advertisements tends to get around to them eventually.

Song Hye-kyo has long been popular for her acting work. She became famous thanks to her appearances in dramas such as "Full House", "Worlds Within", "That Winter, the Wind Blows", and of course "Descendants of the Sun". Song Hye-kyo's surprise divorce from her "Descendants of the Sun" co-star Song Joong-ki appears to be the reason behind her extended overseas trip, though accounts close to Song Hye-kyo state that her mood has improved considerably since this summer.

Song Hye-kyo has also been active academically and helped to raise awareness of Korean history worldwide. Though fans are eagerly awaiting an announcement of her next project, Song Hye-kyo has yet to commit to any offers.