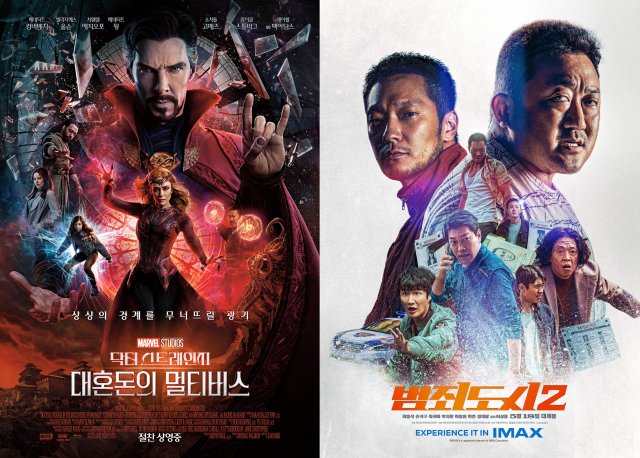 According to figures released by KOFIC (Korean Film Council) on July 21st, the South Korean box office earned around three hundred and fifty million US dollars over the first half of 2022. This is a jump of 143.1%, or around two hundred million dollars, compared to the same time period in 2021. During this time 44.94 million came out to theaters, which is approximately 24.92 million more viewers than came out to South Korean theaters in 2021.

Movie theaters were assisted in this by the lifting of social distancing guidelines in South Korean theaters this past April 18th. Restrictions on concessions in South Korea movie theaters were then lifted on April 25th. It is likely no coincidence that shortly thereafter, the second Doctor Strange movie opened on May 4th to big box office returns. However, it was "The Roundup" on May 18th that set the South Korean box office on fire, earning over twice what the Doctor Strange movie did.

June was also a strong month, with new iterations of Jurassic World and Top Gun also showing strong returns. "The Witch : Part 2. The Other One" was another big performer over June. The months of May and June in 2022 alone accounted for nearly half the revenue that was earned in 2021 at the South Korean box office. The improvement for domestic South Korean films was especially marked compared to foreign films, with a boost of 554.2%, or one hundred and fifty million dollars.

These figures confirm the recovery of the South Korean film market, even as some important differences remain before and after COVID. Sequels and franchise films have done disproportionately well compared to before the pandemic, with "The Roundup" in particular being dominant. The action cop movie was the first since before the COVID-19 pandemic to hit the ten million viewer mark, and it exceeded that to a current total of 12,675,394 admissions.

This is the ninth highest film on South Korea's all time box office, fourteenth including foreign films. The best performing independent film over this time period was "The Red Herring" which came out on May 25th. The political documentary about Ministry of Justice Nominee Cho Kuk earned around two million dollars off of 332,863 admissions. The next best performing independent film was "Candlelight Revolution" with only three hundred thousand dollars off of 42,123 admissions.