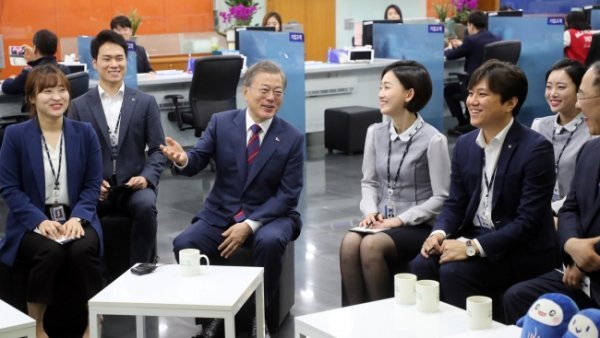 On March 21st South Korean President Moon Jae-in attended an official function at the Euljiro branch of the Industrial Bank of Korea, where he met with and encouraged the bank's employees. They discussed the bank's investments, which include "Extreme Job". Moon Jae-in also created the bank's regular customers.

The President's interests on this line were mainly to do with cultural contents. When bank employees talked about the complexity of the financial side of the filmmaking business, Moon Jae-in responded by noting that even in the event that movies make a loss for investors, their role in cultural production is still important.

Inevitably, the conversation shifted to "Extreme Job", a major and obvious success for the Industrial Bank of Korea. When this was mentioned to Moon Jae-in he jokingly replied that yes, it had made a bit of money. The joke is an understatement, as the film has registered over sixteen million admissions and is number two on the all-time list for South Korean box office successes.