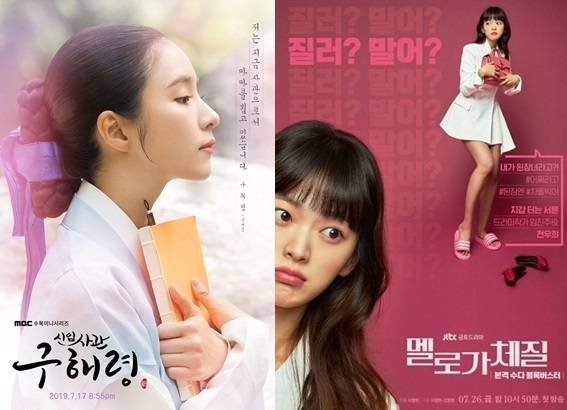 A new trend is emerging of young women aiming for professional goals in Korean dramas. "Search: WWW" has been the main drama as of late on the subject, and it has just been joined by "Rookie Historian Goo Hae-ryung", a historical drama where the focus is not on great battles, but rather a young woman's determination to become a proper scholar in the face of prejudice.

Innovation has been the explicit motivating factor behind the creation of the drama, according to the production company. Feminist themes are obvious, as the title character is seen setting off on the path to revenge having been thwarted as a child in her ambitions to obtain books. Director Kang Il-soo has described lead actress Shin Se-kyung as critical for the leading role due to her excellent diction.

"Be Melodramatic" is also coming out next month on jTBC. "Be Melodramatic" is a drama about the lives, loves, and worries of various women turning thirty and wondering if this means they're adults now. It has been highly anticipated because of the unexpected success director Lee Byeong-heon-I had with the movie "Extreme Job" earlier this year.

Like other dramas in its genre, "Be Melodramatic" will live and die by the chemistry between its leads. Preliminary signs on this front are favorable, as Chun Woo-hee has spoken warmly about the drama's women-centered premise and Jeon Yeo-bin is taking on her first leading role in a drama since giving an acclaimed performance in "After My Death" earlier this year. However, the drama has also faced criticism for using vaguely misogynist language in early promotional material.