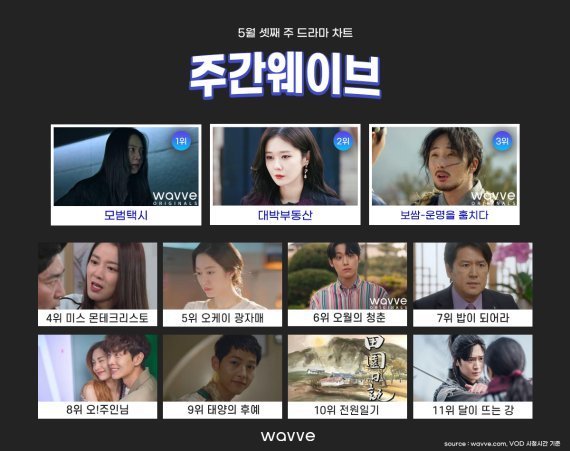 "Sell Your Haunted House" was in second place. "Bossam: Steal the Fate" has had the more dramatic arc, however, arriving in third place following a fifth place finish the previous week and a tenth place finish two weeks ago. "Bossam: Steal the Fate" has faced an uphill battle as a traditional historical drama airing on a cable news network. But its rating have doubled from 3.1% in its first week to 6.5% in its most recent episode, mirroring the wavve charts in its acquisition of an audience.

The evening soap opera "Miss Monte-Cristo" continues its solid performance on the wavve charts in fourth place. The weekend family drama "Revolutionary Sisters" followed in fifth place. "Youth of May" was sixth place, a continued underperformance a drama airing in a more popularized weekday evening slot. The evening soap opera "A Good Supper" was seventh place. "Oh My Ladylord" was eighth place in its final week, this wavve chart's scope being defined as the third week of May.