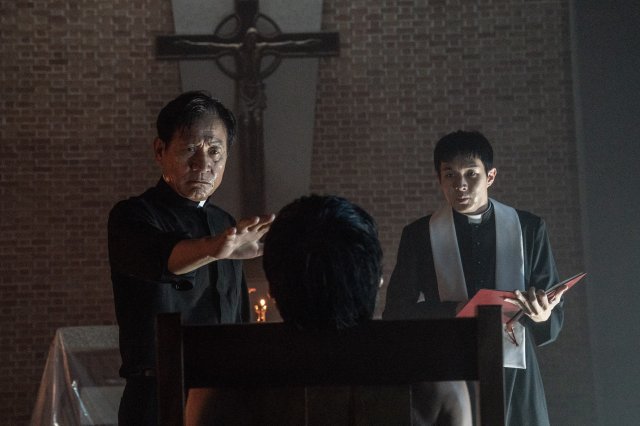 Following Park Seo-joon's brief appearance in "Parasite", Choi Wooshik returned the favor by having a small role in "The Divine Fury". However, according to writer/director Kim Joo-hwan, there was more to Choi Wooshik's character than just fanservice.

Kim Joo-hwan likened Choi Wooshik's character, Father Choi, to the lion in the Wizard of Oz. Rather appropriately, the word for lion in Korean is the same as the title of "The Divine Fury". In any case, Kim Joo-hwan describes the lion as having lost his courage and asks what it means for someone to lose courage. This dovetails with the movie's greater narrative arc about why a person would want to find demons.

Kim Joo-hwan said that Choi Wooshik in particular was deemed great for this role because of his skill as an actor in affecting weakness. Kim Joo-hwan wanted to show off the light in Choi Wooshik's eyes as it starts to become infused with weakness and strength. Kim Joo-hwan went on to praise Choi Wooshik's talents further, though he acknowleged a definite fondness for Park Seo-joon, his leading man in "Midnight Runners" and "The Divine Fury".

Choi Wooshik will, however, be the lead in Kim Joo-hwan's next film, "Puppy", suggesting the two did make an impact on each other for their relatively short time working together. "Puppy" will be a romantic comedy. As Kim Joo-hwan has explained, he feels like he has a lot to say in that genre and has put a lot of thought into the kinds of actors that would be necessary for that.