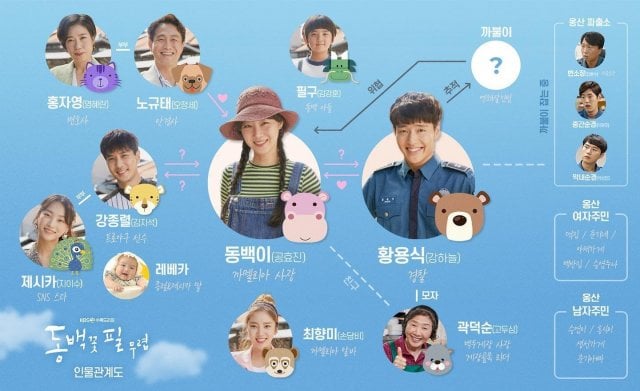 KBS has released a character correlation chart to help keep track of the many people in its latest drama, "When the Camellia Blooms". The design of the chart is simpler and cuter than usual. Much of this has to do with the relatively small core cast and how most of them only have relationships with the lead characters and not each other.

But much of the chart is also aesthetically designed to evoke a deliberate cheerful tone. All the characters save for Kang Ha-neul's compatriots at the police station and the baby are represented by animals. The lead actors are represented by a bear and a hippo, the least cute of the bunch, yet still presented in a very simple style.

Mystery elements are invoked in the form of question marks indicating ambiguously defined feelings. Beyond that, characters are clearly labeled by profession and are all shown to be friends with each other. The obvious exception to this is the question mark in the bottom right corner which refers to a serial killer - this can not be squared with the overall marketing for "When the Camellia Blooms" and is also a long term plot point, hence why it is so deemphasized.