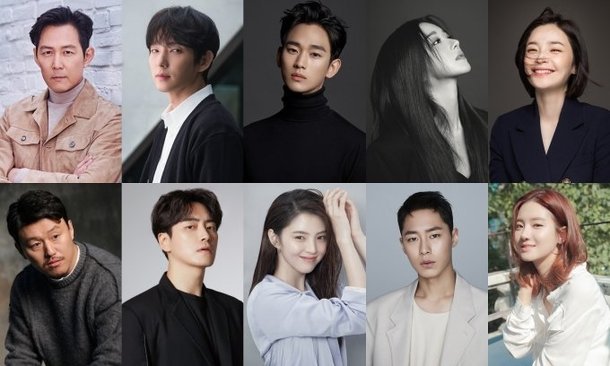 The Asian Artist Awards recently confirmed an initial lineup of presenters. Lee Jung-jae, Lee Joon-gi, Kim Soo-hyun, Seo Ye-ji, Jeon Mi-do, Han So-hee, Park Ju-hyun, Kim Min-jae, Lee Joon-hyuk, and Lee Jae-wook will all participate in the ceremony, which is currently scheduled for November 25th. There is noteworthy variety in the lineup, with many more celebrities currently in negotiations for their appearance.

Lee Sung-kyung, Ahn Hyo-seop, Kim Seon-ho, Ahn Bo-hyun, Kim Hye-yoon, Lee Joo-young, and Ahn Eun-jin are among those performers yet to be confirmed. Nevertheless, the ten confirmed celebrities already show noteworthy diversity in terms of general fame as well as the dramas they appear in. Kim Soo-hyun and Seo Ye-ji were an international sensation in "It's Okay to Not Be Okay" earlier this year and are the biggest draws.

The other stars represent a wide slate of various projects from the last year. Lee Jung-jae was the title character in "Chief of Staff - Season 2", while Lee Joon-gi was the lead in the recently concluded "Flower of Evil". Jeon Mi-do was the breakout star of "Hospital Playlist" while Han So-hee had a similar role in "The World of the Married". The actors also come from a wide variety of agencies, highlighting the prominence of the Asian Artist Awards as a celebratory event.

Use the CHOEAEDOL Celeb App to vote